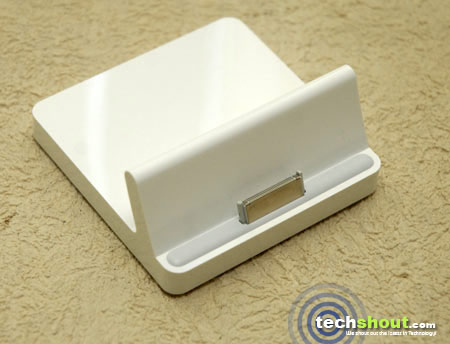 The Apple iPad has carved out a distinct segment of manufacturers designing peripherals exclusively for it. The geniuses in the company’s lab too have been sketching out various ways to walk a step ahead of third-party developers. The iPad Dock from their desk appears to be one such creation. Amongst the varying trimmings which paved way into our review labs, it looks like a skilful piece of a sculptor. Since we couldn’t always keep the device by our side, this offering came to the rescue and so we’ve decided to give it a quick glance. Read on to know about the performance delivered by the Apple iPad Dock and if it is capable of standing alongside the first generation Apple tablet.

Every time we were left with no option but to leave the iPad alone, the iPad Dock seemed like the only trusty companion. It could remind you of a post-it box when placed without the tablet. On other occasions, its 1.25-inch slanting stand supports the tablet’s stance while it rests on board. Painted in the company’s conventional shimmering white dominion, the station has been outfitted with a gray leather base to affirm the dock in its position. A strap of the same material is also laced out along the connector on the dock for safely securing the iPad when slid into it. With a depth and width measuring approximately 2.75-inch each, the dock has been equipped with a PC connector and line-out audio port.

You need not sweat to connect these devices right as you can simply insert the plug into allotted slots. While the iPad unwinds on the white stand, users can connect it to a PC through the appropriate port. Further, it is possible to simultaneously sync the device with iTunes. The 10W USB Power Adapter can be employed for charging the Apple iPad Dock whereas the audio counterpart calls for separate cables which don’t come packed with the bundle. The quality of your speaker will influence the renditions of acoustics but the basic fabric of tracks will emanate from the iPad’s gambit.

The dock has been packed with just the required ports and connection, allowing you to work even when the iPad is stationed on the dock. Though this stands true with some third-party accessories, the offering has a simple yet trendy feel to it which bags a brownie point.

The company offers no supplementary connectors like an adapter with the dock which may require users to purchase them separately.

With the same elegance and feel as other products from Apple, the iPad Dock satiates necessary functions. It makes for a steadfast element of the device’s family and lets you sit back leisurely without being worried about the coveted iPad. However, the absence of supplementary cables could lead to issues for some, sending them on a separate shopping trip. Available for Rs. 1,600, the Apple iPad Dock is indeed worth its price and blends well with the tablet’s looks. Considering its efficiency and proficiency levels, we’ve presented it with a rating of 8.5 on 10.