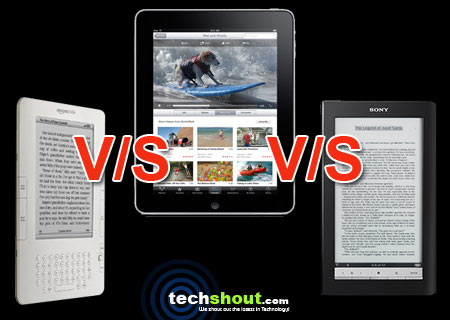 A lot of names like Sony, Amazon and Samsung would have sprung to our minds if anyone shouted out ‘e-reader!’. But that was during the pre-iPad-release days. No, we’re not categorizing it already, just mulling over the fact that it’s exactly what the device seems to serve as primarily. The telling title is something that might have entered the thoughts of anyone concerned about the iPad. Steve Jobs may call it a device that falls somewhere between a netbook and smartphone, but it cannot be denied that many consider it to be somewhere between ‘already-done’ and a prototype that should have stayed under cover until more features were added. Or at least tell us what it is.

Consider an overview of the iPad, a 9.7″ multimedia tablet that allows users to browse the web, peruse eBooks, watch movies and listen to music via its capacitive multi-touch color display. It houses a 1GHz Apple A4 processor, runs the iPhone OS, offers up to 64GB storage capacity and extends Wi-Fi and/or 3G connectivity. The Sony Reader Daily Edition and Amazon Kindle 2 flaunt 7″ and 6″ EPDs, respectively. They allow for 3G connectivity, accommodate a little over 1GB of memory and feature audio players as also picture viewers. The Sony e-reader’s memory capacity may be expanded to 16GB with its in-built card slot. What’s more, unlike the iPad, Reader and Kindle users can avail of free 3G wireless services. The Sony and Amazon e-readers are priced at $259 and $399, correspondingly.

Let’s start on the iPad now, keep in mind the fact that we’re dipping our feet into tentative waters now. Not a feeling that’s difficult to sympathize with if one recalls the beating Apple’s iPod received when it was released as an MP3 player back in 2001. It did pack in 5GB of storage which was a humongous amount at that point of time, almost as huge as its $399 price tag. Those were the days when an MP3 player could be snapped up for $50. Fast forward back to the present and every other person seems to own one or want one. So why does the iPad make us feel rather crabby about forking out $499 or more for it?

Apple’s latest and much-publicized device proffers only 10-12 hours of running time before it needs another battery recharge. The aforesaid e-readers can go on for almost an entire week with wireless turned on and a fortnight with it turned off. Their EPD displays are much friendlier to the eyes and battery life as compared to the iPad’s LCD display. Then again, it’s not meant to be an e-reader right? Difficult to ignore Apple harping on about their iBook application that includes an iBookstore though. Titles from major publishers like Macmillan, HarperCollins, Penguin and others will be housed in the iBookstore shelves.

It doesn’t support flash or multi-tasking and has no webcam or USB port. There have been speculations that the ‘missing’ camera feature for video chatting is aimed at cutting down on the iPad’s end-price. We mention a camera for video chatting or conferencing not only because it’s a popular communication method today but also since we don’t really fancy pointing and shooting with the 242.8mm x 189.7mm x 13.4mm tablet device. We’ll snap up the photos with a handy phone or digicam instead. The inability to multi-task is certain to frustrate a lot of users. Add to that the non-compatibility of flash based websites too.

The color LCD delivers resolutions of 1024 x 768p at 132ppi, so no HD support and a display screen aspect ratio of 4:3. A number of mail attachments are supported by the device comprising of JPG, TIF, GIF images, HTML, and HTML web pages, PDF, PPT, TXT, XLS, VCF and others. The virtual keyboard, incorporated dictionary and language support feature accommodate several languages. Additionally, the device runs more than 1,40,000 applications from the App Store as also those already purchased for the iPhone or iPod touch. It possesses an embedded speaker, microphone, 3.5mm headset jack and 30-pin dock connector. Supported music formats include AAC, MP3 VBR, WAV, AIFF, protected AAC and Apple Lossless.

Apple has devised their device in two different models, one which has Wi-Fi and one that lends Wi-Fi as well as 3G connectivity options. The former comes with a price tag ranging from $499 to $699, while the latter costs between $629 to $829. Apart from that, each model is out in capacities of 16GB, 32GB and 64GB. AT&T will get a share of the pie via a joint collaboration with Apple for providing 3G pre-paid plans to users of the gizmo. The company doesn’t seem too keen on categorizing the iPad properly. Is that what’s leading to the feeling of insecurity? Consumers like to know what they’re buying and telling us that it’s neither a smartphone nor a netbook doesn’t seem to be helping the cause.

It’s easy to spot the kind of people that will be attracted to the iPad though. Since the device doesn’t seem to be heavy with too many confusing features, a section of people who are not quite tech-savvy may be happy with the tablet. On second thoughts, Apple was probably attempting to cater to this market in the first place. Let’s not forget the avid gizmo collectors who may want to buy the device in case it disappears from the market. Remember Newton? Not the one who needed an apple tossed on his head before figuring out that things fall ‘down’. We’re referring to the infamous Apple platform for early PDAs. We won’t keep ranting in this direction since we don’t like having to eat our own words like the harsh iPod critics did. Plus, it would taste even bitterer if the iPad does fly off shelves since Apple is rumored to rake in around $200 for every iPad sold. No, we can’t figure out why that should bother anyone at all.

While everyone in tech world tries to inform everyone within two feet of them on their take regarding the iPad, other e-reader manufacturers are also considering the implications of Apple’s release and its product positioning in the market. Some expect it to renew consumer interest in e-readers, while others anticipate that it may eat into the share of its rivals. Admittedly, the tablet carries a heavy price tag. Chew over this, it does not exactly pose as an e-reader but a multimedia tablet, if you please. We’ve already taken the capabilities of a regular e-reader into perspective. So in whose favor does it tip on the weighing scale? It’ll probably be contingent on the person buying it as also his wallet and not remote appraisers. Do they want an e-reader or a device that can act as an e-reader cum media player?

Apple has probably invented an advanced e-reader with the iPad or a tablet PC that will be upgraded with more features soon enough. There may be those willing to hang around and wait for that, unless we’re sorely mistaken. But we cannot leave out a nagging suspicion that the company knew exactly what it was doing when it decided to miss out on adding netbook-like features to their device. This is Apple we’re talking about, right? Or is that last query clinging onto the company’s well-earned brand reputation?