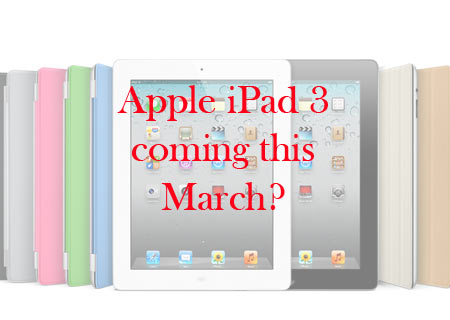 Lists of speculated features and rumors on how the Apple iPad 3 could turn out haven’t fallen short over the internet these past few months and chances are that a certain March event will finally put these presumptions to rest. Well, the first week of next month isn’t that far off anyway.

Through the details obtained from a few reliable sources, the guys over at AllThingsD state that the successor to the iPad 2 is most likely to make an appearance at one of the company’s special events. The speculated date should fall sometime during the start of next month. And when it comes down to the venue, this tablet could be unveiled at the Yerba Buena Center for Arts in San Francisco, so says the report.

As previously mentioned, rumors on how the iPad 3 could turn out are already available in abundance. And just as the saying goes ‘the apple doesn’t fall far from the tree,’ the next generation tablet from Cupertino is anticipated to closely follow along the lines of its predecessor in terms of design, but with a sleeker form factor.

Component-wise however, it’s expected to pack in a much faster hardware assortment. For processing power, the quad core A6 SOC is presumably the one to take on the job. An improved graphics rendering unit and an enhanced Retina display that stretches up to 9.7 inches diagonally with a resolution of 2,048 x 1,536 pixels should also be in the works.

To sum it up, the Apple iPad 3 is likely to surface at an event that’s speculated to take place sometime during the first week of March. Price and availability details are expected to surface at the time of announcement.