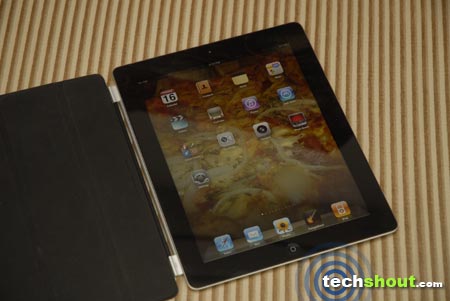 No we weren’t expecting a unit of the Apple iPad 2 to drop by our quarters for a review so early. Considering most Apple fruits reach India only after they’ve been tasted, tried and probably consumed wholly in the U.S., this time Apple did manage to surprise us. And we’re already giving the company a thumbs-up for that. The familiar white packaging that we received gave out a few details about what we could expect from the highly-anticipated device seated inside. So here is our analysis of the 64GB Apple iPad 2 Wi-Fi + 3G version.

The box brought along a 10W USB Power Adapter and a dock connector to USB cable. As ironic as it may sound, unlike what we witnessed with a hands-on of the original iPad, we didn’t see everyone gushing about the device this time. No, not even after we had it out in the open. Is it because we’d been bored to death with image leaks or speculated features or did everyone already know everything about the tablet? Admittedly, nothing in terms of design or profile actually had us in awe when we set our eyes on this second coming of Apple’s tablet. Though the noticeably sleeker chassis the iPad 2 adopts or even the curved edges aren’t worth giving a miss. 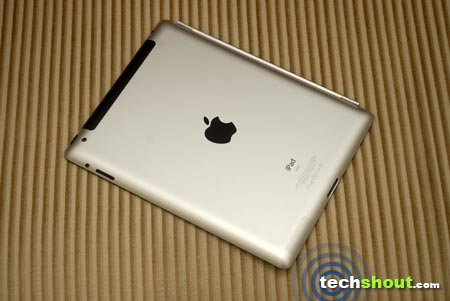 Remember how unattractively square the original iPad was? The company has done away with that and the tablet with its now more rounded corners looks very shapely and elegant. It’s also more comfortable to hold in the hands. A side view revealed it to be a whole 4.4mm thinner than its older sibling and also more lightweight at a mere 1.3 pounds. For those who think these are just numbers we’re rambling, we can tell you that using the device continuously meant we were getting a sweeter deal for not just reading ebooks and playing games but everything in general. 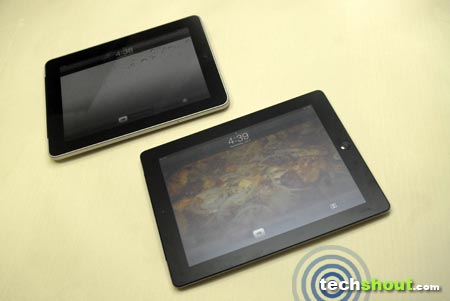 As we held the Apple iPad 2 Wi-Fi + 3G tablet upfront, we noticed nothing really changes as far as the screen is concerned – it’s the same 9.7” LED-backlit multi-touch display. Booting rather quickly, we were a tad bit disappointed to find the tablet having the same 1024 x 768 resolution as its earlier iteration. Nevertheless it took about a couple of seconds for us to put our grouses to rest. The display, in fact is as good as Apple could have made it. Competitors really need to do their homework well, before they say ‘so and so is an iPad killer…’ When the screen did light up, we realized why it’s spelt apple with a capital ‘A’. We can lay our bets on any manufacturer really doing touch as well as the company – the screen is smooth, interface efficient and overall experience ultra-responsiveness. 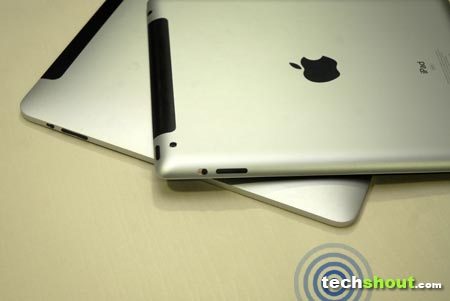 Right on the top bezel of the screen was the much-talked about front-facing VGA camera. We were only bound by duty then to flip the iPad 2 tablet over to see the rear-fitted camera which Apple says shoots videos at 720p. Getting straight to testing the incorporated cameras had us see the tablet falling flat in the snapping up department at least for still images. It does a menial job and there’s nothing to write home about it except that it’s passable. Video recordings, though not exceptional did have us achieving wee bit better results. FaceTime or Photobooth though are both a nice way to make the most of the front-facing VGA camera. The right edge of the tablet is spruced up by an easy-to-access volume control button and a switch to mute / unmute the ringer. The latter knob offers dual functionality, serving up to lock the orientation as well, though you’d have to tweak it in the software to work like that. 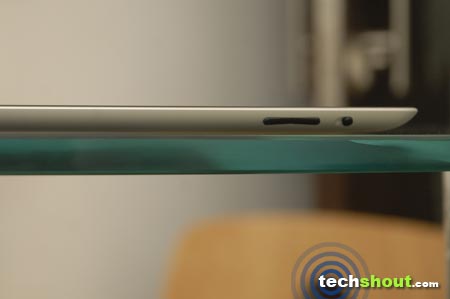 Apple keeps the dock connector right where it was the last time along the bottom and the power button too working for sleep and wake functions is placed right on the top of the backside. In line with it, though more along the top edge is the 3.5mm stereo headphone minijack. The left edge accommodates the microSIM tray. The speaker we observed gets a change in position and has now been shifted to the back unlike earlier where it was more along the bottom. Having run through ‘thinner’ and ‘lighter’, we got down to scanning ‘faster’. The company had been waxing eloquent about the dual-core A5 chip on the inside directly translating to an upscale in performance. Keeping technical jargon aside, in a real-world scenario, the Apple iPad 2 Wi-Fi + 3G was definitely on-the-spot. We did however have to place the original iPad next to the current version to actually notice the difference. Snappier than its predecessor, you’ll actually see iOS 4 playing things up this time around with graphically rich and intensive games. The dual-core processor and platform work well together to bump up web page loads too. 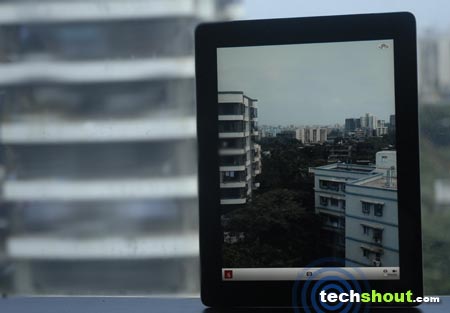 Obviously, we’d be ignorant if we didn’t put Apple and Applications together at least once – one of the most important features rooting for any of the company’s devices. We started with a look at Apple’s very own applications like PhotoBooth for instance. The tool lets you toy around with nine different effects in real-time minus any sluggish behavior. Taking a leaf from its desktop and notebook versions is iMovies that also managed to impress, only may be just a little more because it’s been redone from ground up for the tablet. And of course GarageBand too that kept the audiophile in us engaged for long with the multitude of niceties it had on offer. The thing that emerges commonly from our time spent with each of these applications it’s that Apple has paid a lot of attention to detail. 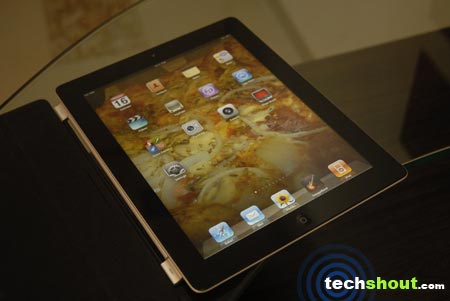 We tried our hand at third-party apps too and were left mighty pleased to say the least. SandStorm kept us engaged with its crisp visuals while Fruit Ninja and Angry Birds Rio didn’t disappoint either. The graphics really do play up for the better. An Android v/s iOS war would obviously see Apple emerging victorious in this department and it seems to virtually have an application for everything at least around 65,000 plus apps are almost certainly saying everything. If only some things were kept simple – like being able to save attachments including files conveniently in emails. There wasn’t anything noticeably different as far as the speakers were concerned too despite the audio experience being slightly better than what we had experienced with the first version of the tablet.

We don’t think we’d want to leave out the Smart Cover accompanying the unit we received for a review. The polyurethane model is available in a range of colors and while we did get a boring black one, it proved to be quite functional. Just hold it close to the tablet and it clasps to the sides courtesy of the magnet. Interestingly, the case when covering the screen instructed the Apple iPad 2 to sleep and taking the cover off had the device automatically waking up.

The display though the same is beautiful and the touch experience only seamless.

The 10 hour battery life does the talking for itself.

The Apple iPad 2 is expensive.

There was just this one instance while customizing the homescreen that we had all the icons jiggling in their positions and the screen freezing up. Possibly the only time we didn’t find the homescreen beautiful. And when it comes down to the time we spent with the Apple iPad 2 in totality, we loved it. The tablet is thinner, lighter and faster, sure to keep competitors on their toes. But has Apple done enough to really stay ahead in the race? Definitely not ‘enough’, but yes quite there. We’re marking the Apple iPad 2 Wi-Fi + 3G at 9 out of 10. The 64GB Wi-Fi + 3G version will set you back by Rs. 46,900.

Here’s our video review of the tablet: 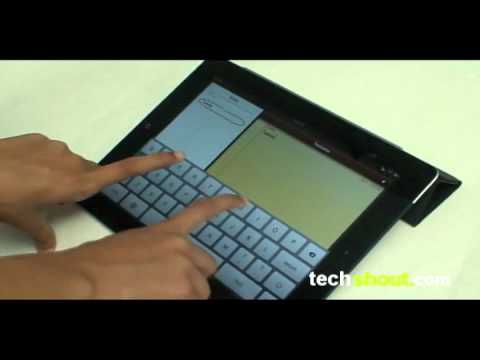