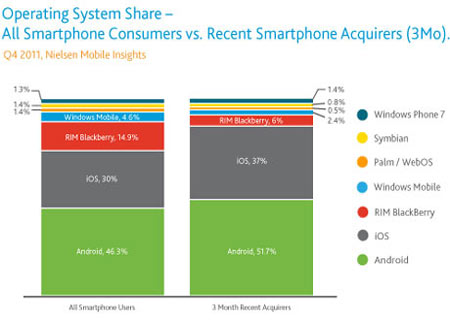 Since the launch of the iPhone 4S with iOS 5, the share claimed by Apple in the market has seen a rapid growth, says a recent survey reported on the Nielsen blog. Nonetheless, Android apparently remained the most preferred OS for handsets in the last quarter of 2011.

The report formulated was based on the preferences of new and old mobile phone shoppers. It analyzed the statistics from Q4 2011 against previous quarters, thus also comparing the choices expressed by recent phone acquirers with existing users. The study considered categories like smartphone consumers as well as overall mobile users.

According to the findings, Android claimed a share of 51.7 percent among new smartphone acquirers in Q4 as opposed to the 46.3 percent seen with all existing smartphone users. Following this, iOS rose by 7 percent in the third quarter, with 37 percent new smartphone buyers preferring the iPhone, especially the iPhone 4S. Apart from this, the RIM market share dropped from 14.9 to just 6 percent, while Windows Phone 7 gained 0.1 percent, with a total of 1.4 percent recent smartphone acquirers buying it. 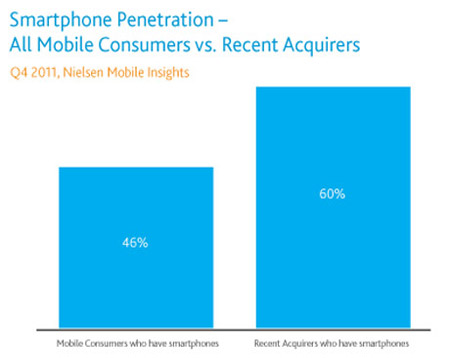 Another aspect of the mobile phone market studied as part of this report is the penetration of smartphones in the sector and the tendency of consumers towards it. Considering all existing mobile phone users in the U.S., it was seen that 60 percent of those who bought a handset in the last quarter of 2011 preferred a smartphone, while only 46 percent of old users preferred the familiar.

This Nielsen report shows that smartphones are becoming increasingly popular, especially among new users. The survey also hinted that the number of fresh smartphone buyers opting for Symbian, Windows Mobile, or webOS is decreasing.