Strange as it may sound, Apple iOS 7, the latest version of the mobile operating system, bears a feature which lets users move their heads in order to control the interface. This is an Accessibility feature from Apple which has been discovered in the beta version of the software that is accessible only to developers as of now. Simple head movements towards the left or right allow users to perform a number of functions on their iPhones or iPads.

The feature was apparently discovered by an anonymous tipster who passed on the information to 9to5Mac. It can be found in the Accessibility menu option within the Settings section. By the looks of it; this little Apple iOS 7 trait looks as if it has been aimed at those with certain physical disabilities. That’s because, it’d simply be a tiresome task for normal users to access their devices while twisting their heads every now and then.

The video we’ve embedded within the space below gives a full lowdown on what this Apple iOS 7 addition is all about. A moving ring on the screen is what does the trick for the feature. All a user needs to do is wait for the ring to surround their desired trait, and flick their head to the left or right when it does. 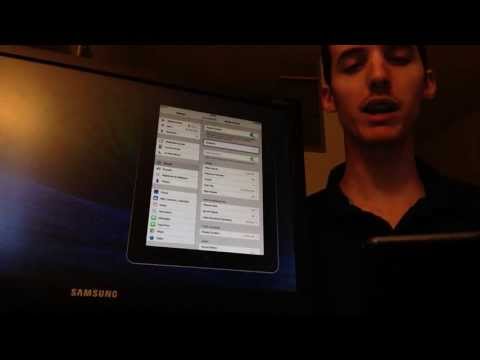 Among all the new features that were revealed to form part of the new Apple iOS 7 platform, its interface additions were the ones that stood out the most. The new Control Center trait acts as a hub for quick access to functions like Airplane Mode, Wi-Fi, Bluetooth, Clock, Camera, Calculator, Flashlight and more. And then there’s the Notification Center which provides information related to weather, traffic, meetings, events, missed calls and messages on the lock screen itself.

iOS 7 won’t be released for current-gen devices officially till the fall of this year.