Apple has issued new security updates for its iOS mobile platform. Version 7.0.6 and 6.1.6 have started to roll out to iDevices and they ‘provide a fix for SSL connection verification,’ according to the changelog. The new firmware upgrades are minor ones and are small in size.

iOS 7.0.6 is the sixth release since iOS 7 was made available to the public. According to Ars Technica, this version is available for many devices, unlike 7.0.5 that was issued for a few iPhone 5S and 5C models. The report notes that devices which run iOS 7 (iPhone 4 and newer, 5th generation iPod touch and iPad 2 or later) are entitled to the latest fix. Apple has also issued the contents of iOS 7.0.6 on its website. 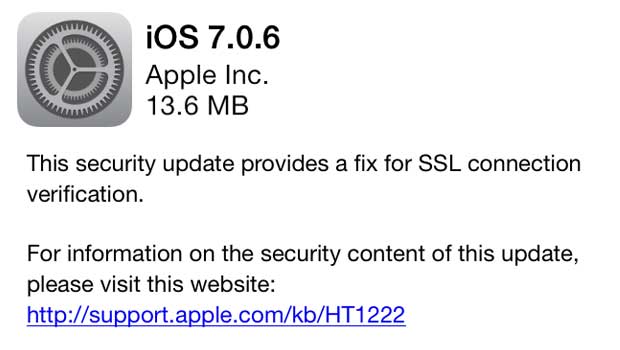 According to the document, the SSL issue allowed attackers with ‘a privileged network position’ to ‘capture or modify data in sessions.’ The problem was mainly because ‘Secure Transport failed to validate the authenticity of the connection’ and a fix was applied by ‘restoring missing validation steps.’ Coming to iOS 6.1.6, this release is targeted at the iPhone 3GS and the iPod touch 4G.

iOS 7 has seen a good deal of issues. Some of the main ones include white or black screen of death which causes devices to soft reboot automatically. Then there are the zooming and parallax effects which apparently gave users motion sickness, headaches and more.

In other news, Apple is said to be working on iOS 7.1 which is the first major release in the series. The update is expected to arrive on March 15.

Facebook
Twitter
Pinterest
Linkedin
ReddIt
Tumblr
Flip
Previous articlePossible iOS 7.1 release date has been tossed out in the open, new features leak
Next articleApple will give you up to Rs 40,000 off on new laptops when you trade-in your old MacBook