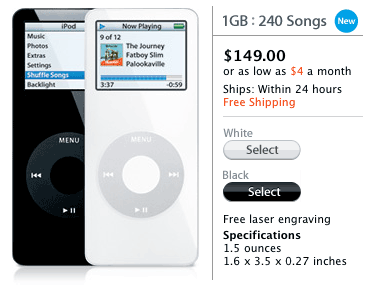 Apple Computer today launched a 1GB iPod Nano for $149. The memory-based MP3 player iPod Nano1GB has all the same features as 2GB and 4GB version, except that it is smaller storage capacity and cheaper.

Apple 1GB iPod Nano is available for purchase on its Web site and from its retail stores and authorized resellers. Introducing the new Apple 1GB iPod Nano just a few days before Valentines Day will definitely get them a lot of orders. A cool iPod Nano MP3 player for your Valentine?