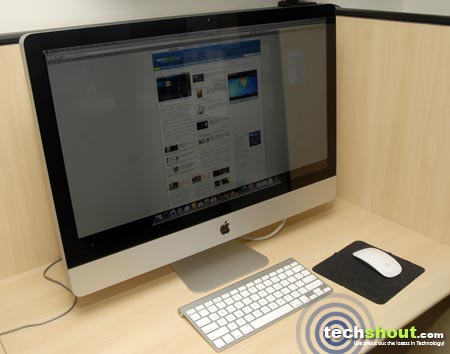 Apple has its basket full, dropping in yummy fruits into tech garden every now and then. But staying forthright in the midst of the tiffs surrounding the harvests after they’ve been cultivated is something praise-worthy too. More recently the iPhone 4 gave reasons to get tongues wagging; case in point every time Steve Jobs sets the bait out it’s bound to get some tanning on the hide. If we move back less than a year in time, enthusiasts will remember the latest version of the iMac too getting a similar treatment citing display issues. Having altered through five forms now, we had under our wings the new Apple iMac 27-inch that was recently upscaled with a choice of Intel i3, i5 and i7 processors. We specifically received the i5 version for a review and as we grab a bite out of this Apple treat, here’s a lowdown to know if you should follow suit.

The receptacle that brought in the Apple iMac 27-inch was huge and isn’t surprising with the desktop weighing under 14kg. What lugged along were two installation DVDs, user guide and a year of limited hardware warranty. Much sleeker and slimmer, Apple has given an anodized aluminum treatment to the device all through. An AC power adapter, the Apple Magic Mouse and Apple wireless keyboard were in the box too. Showing a noticeable resemblance to the earlier crop, this latest edition has definitely shed weight despite the huge 27-inch screen which takes up substantial space. The neatly contoured stand makes the device effortless to shift around and the much-needed flexibility will let you adjust the screen at your discretion.

The black Apple logo sits in the face of the display along the bottom and the bezel holding the display is painted black while the rest of the chassis is grey. Compatibility to non-Apple members in ‘techvilla’ is covered up with a wide range of ports. A look on its rear side reveals a power button on the left while the Ethernet, the Mini DisplayPort, 4 USB 2.0, audio in, 3.5mm headphone-out and FireWire 800 ports are seated on the right. What’s new in the Apple iMac is the added SDXC slot right below the slot-loading SuperDrive. A Power port and security slot stand in space on the stand. It takes a while before you identify the functions on the face which include integrated infrared receiver in the lower end of the screen, built in microphone and the iSight camera on the top edge. Look below the screen and you’ll notice the very intelligently fitted stereo speakers on either side of the stand. The removable memory access bay also features here. 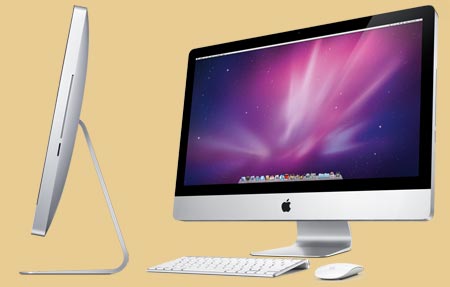 The Apple iMac 27-inch we received was horse worked by an Intel Core i5 quad-core running at 2.8GHz with 4GB 1333M of DDR3 memory, rounded off by 1TB/Radeon HD 5750/SD. Simple plug-and-play with a few registrations and we were raring to go. The keyboard felt very diminutive when placed in front of the iMac, but it’s comfortable to use nevertheless. Sadly, you can’t say the same about the mouse which we had scanned early this year and yes nothing has changed. The screen holds attention almost as soon as it lights up; it’s drool-worthy for sure! A neat and clean desktop welcomed us with the regular Apple dock sitting flush on the basement of the screen. There’s the Finder, Dashboard, Mail, Safari browser, iChat, Address Book, iCal, Time Machine, System Preferences and more. You have completely control over what stays and moves out of the dock. Unlike what’s seen in the MacBook, applications and tasks seated in the dock don’t pop out when you hover the mouse over them. We had the desktop set up with our network in what felt like a jiffy; a simple Ethernet cable and Airport was quick at identifying networks. If you must choose Wi-Fi for access, that’s a breeze too and it’s no different when you connect devices via Bluetooth.

Version 10.6.4 of the Mac OS X plays up well and its better done than said like the thing was born for multitasking efficacy. As we hopped onto the Web, Safari 5.0.2 showed us what speedy connections were all about. Whether it’s opening multiple tabs or saving bookmarks, the browser in its minimalistic interface is no different from Mozilla’s Firefox in terms of web navigation albeit with a much suave look. YouTube works just fine until you start caring enough about HD and the site suddenly turns too slow. Move over to the Dashboard and there’s bountiful to choose from like iCal, iTunes, Clock and Weather widgets. It’s a snap to have your account configured in iChat and should please always ‘switched on’ users. We didn’t want to disappoint the implanted iTunes 9 and gave it the much needed upgrade to version 10. That kept our audio-starved palettes satiated whilst we picked applications from the App Store. 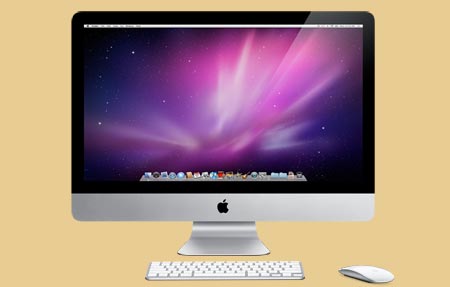 Photo Booth got the iSight camera at work instantly with the indicator blinking green when being used though Apple obviously refrains from revealing the resolutions affixed on it. There couldn’t have been a snazzier webcam with the wide effects you can give still images or movies. Capturing images at a 640 x 480 resolution, shortcuts right there let you share pictures via Email, iPhoto or even use them as your account picture or Buddy Picture on chat. Speaking of iPhoto 9 in particular, it gets two new attributes worth mentioning Faces and Places. While the former makes for an enthusing way to organize friends and family using their names, Places requires you to be armed with a GPS support though you can also choose to only label the place manually or drop a pin on the map. iMovie is at its very best adding music, effects, themes and much more to your movie. It couldn’t get better than this with home videos gaining the ability to transform into Hollywood style drama and that too effortlessly. Unleashing the musician in you is as simple as jumping onto Garage band in the iMac because that’s where all the action is happening. Your aural senses are left yearning for more with much detailed audio and our Prince of Persia movie session saw us deeply engrossed. Video quality too is seamless, crisp and almost as good as real. If you leave aside the slightly reflective screen, irrespective from which angle your looking the display is at its best behavior.

Apple is generous enough to pack in attributes like Automators to run workflows and Dictionary that offers results from Thesaurus and Apple. You can even connect online to know more from Wikipedia. After all this, the desktop was too hot for comfort. It’s probably the aluminum fabrication used that retains heat but when you have everything integrated in one mean machine, it’s only inevitable that you get decent cooling fans in place too. Intel’s Turbo Boost technology does a pat on the back job with being energy efficient. Leave the PC idle and you’ll see the lights going dim, coming to life only when you approach it. Among the many options in System Preferences, the Energy Saver feature should help you do your bit for the environment.

You’ll spend much of your time gazing and ogling at the huge screen when it lights up.

Setting up the all-in-one is a smooth ride.

The SD card slot is without doubt a neat inclusion.

We sincerely hope internal components are safe from all the heat being pumped out.

Why oh why Apple does it have to be so expensive?

To sum it up, the new Apple iMac 27-inch is on the fringe of being personal and professional. It’s without doubt one of the fastest computing devices in the crowd and quite complacent at that too. What’s more its speed isn’t limited to plain access whether its duplication, switching between context or importing files; lots can be done. Rumors of Apple opting for liquid cooling with its increasing affinity towards the latest Intel cores in future iMacs should also have you interested. With this nestling out in the open to fend for itself and the wide acceptance of Apple products in the Indian market despite the steep price says the company is doing a good job after all to allure users. If spending Rs. 1,23,900 on a PC features in your routine shopping list, then this is the desktop for you. We mark the Apple iMac at 9.2 out of 10.