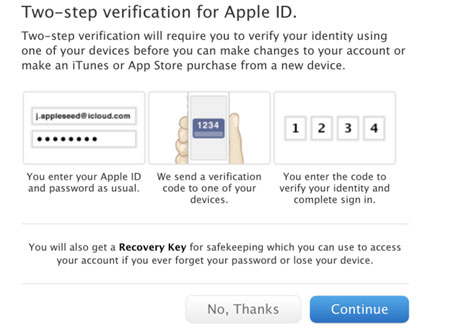 Apple ID and iCloud have been given two-step verification as an added layer of security. What this means for users is that they will need to type in their password as well as a 4-digit code sent to a trusted device before being able to log on to their accounts or purchase apps from a new, unfamiliar gadget.

And once enabled, the only way for Apple ID users to access their accounts will be through this two-step authentication process. This may add a bit of a hassle to signing in, although it will all but guarantee that users’ accounts are not compromised. And the choice is left to users which of their iOS devices they want to label ‘trusted.’ 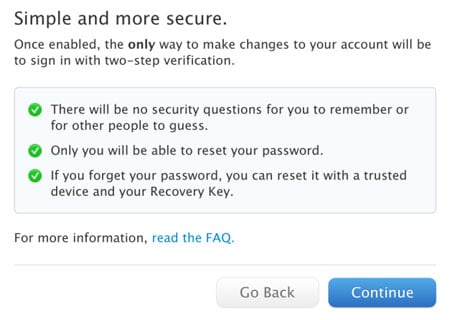 So what is the need to set up such an elaborate process? Well, one is to safeguard against hacking attempts. Such is the story of Wired journalist Mat Honan, who, in August last year, lost all his data on his MacBook, iPhone and iPad as collateral, simply because those who broke into his accounts didn’t want him to be able to regain control. His Twitter account was the only real target of the hackers’ fascination.

Anyway, that’s a story for another time. But with this new two-stage authentication system, only users themselves should be able to make purchases from iTunes, keep personal information up-to-date, and most importantly, locate, lock, and remotely wipe clean their devices. 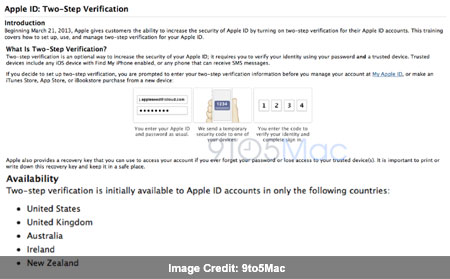 How to set it up: To put this added layer of security into place, users will have to choose to manage their Apple ID when they sign in. Then they will need to select ‘Password and Security,’ and under the two-step verification section, selecting ‘Get Started’ and following the on-screen instructions will complete the process.

9to5Mac is reporting that the service is only available in the US, the UK, Australia, Ireland and New Zealand, and has an image (posted above) supporting its claims. The website says that the company has already begun training phone support staff for the new system. It also points out that Google has implemented such a system going back years.

So does the two-step verification process for Apple ID and iCloud users make for more of a hassle, or does it give some much needed peace of mind that an added level of security measures brings in? We can’t quite decide, but the benefits seem to outweigh the annoyances.