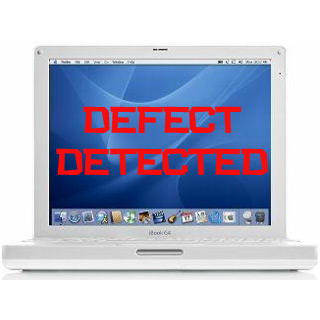 The Danish Consumer Protection Board has detected a design flaw in Apple iBook G4 that after around a year’s usage results in the device to power down and leaves a blank screen. The board has already ordered the company to refund one Danish customer, and expects its findings to influence cases elsewhere, a spokesman said on Friday.

Apple users in Denmark issued regular complaints to the Consumer Complaints Board of the National Consumer Agency. After receiving 10 complaints from iBook owners that their machines would no longer start up, the board commissioned a detailed study of four complaints received between April and November 2006, including a microscopic examination of the faulty machines’ motherboards. That’s when it decided to take a serious step by sending the iBook to an independent electronics lab. The lab discovered that the problem raised from a solder joint that loosened slightly every time the iBook was turned off and on.

In s statement released last week, board lawyer Frederik Boesgaard Navne said, “It is a bit like a person dying a little bit every time he breathes because the cells break down.” Navne continued, “In the same way, the computer dies a little every time you turn it on and off.”

Once the solder joint breaks, power no longer flows between two components, causing the iBook to power down, the lab found. IBook owners unable to get Apple to fix the problem were able to get their machines to reboot by attaching a clamp to a particular area of the computer, or taking the machine partially apart and nudging cardboard shims in place. In both cases, the added pressure reestablished the connection between the components.

According to the Danish Consumer Protection Board, its findings could have global implications, claiming that “thousands” of Apple customers worldwide have tried to get the company to admit the defect and replace the computers. “The question now is whether Apple is going to go on denying that there is a design flaw in the same type of computer in the world outside Denmark’s borders,” the board said.

Apple has not addressed customer complaints on the basis that there was no proven design flaw, or that the machine’s12-month guarantee had expired, the board said. Apple has settled a number of cases in Denmark based on the board’s investigation.