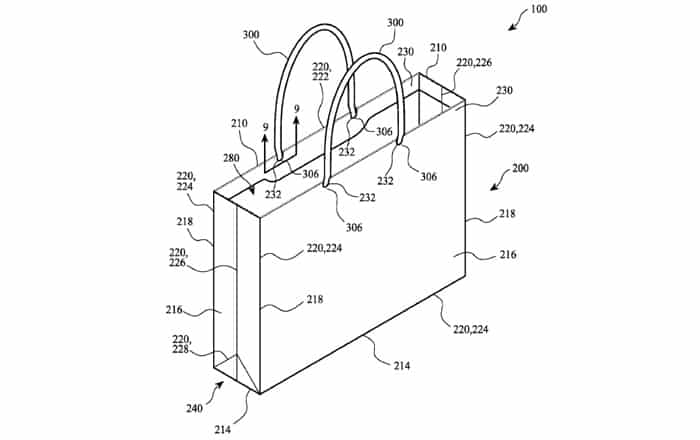 Apple is known for being very particular when it comes to their products, making sure everything is perfect right down to tiny details which most people wouldn’t even notice. This obsession has now reached new heights with the discovery that the brand has filed a patent for a new kind of paper bag.

Just to be clear, this isn’t a special ‘smart’ paper bag which can do cool things like connect to your phone via Wi-Fi. It’s an ordinary one which is made out of recycled paper. The fact that Apple is investing time and money into developing shopping containers is very surprising, given its reputation as a tech innovator not a bag manufacturer.

Apple’s patent application itself is matter-of-factly titled ‘Bag.’ The creativity doesn’t stop there, with the document containing choice phrases which describe bags as things which are often used to contain items. The main reason why the company is filing such a patent is because it’s come up with an innovative way to make recycled bags stronger.

As explained by Apple, bleached bags tend to get weaker the more recycled paper is added to them. Such items having greater than 40% to 50% post-consumer content would be prone to tearing, especially in containers with multiple folds which allow it to gain a shape.

Apple’s efforts have given fruit to a bag made out of white solid bleached sulfate paper with at least 60% post-consumer content, much higher than ordinary white bags. The patent also details methods to strengthen weak points and resist tearing with the help of paper reinforcement inserts.

Even the bag’s handles get special attention, with Apple stating that it plans to use knitted paper fibers in a tight-knit pattern with a large diameter in order to give the feeling of a shoelace rather than the rough texture of most grips.