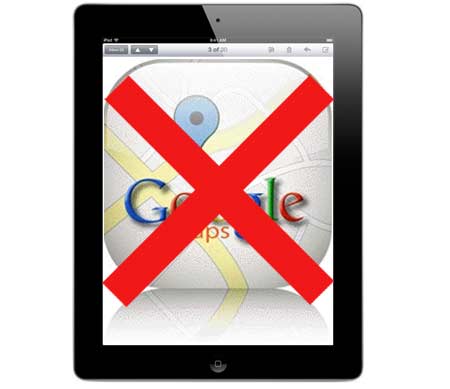 If the latest rumors are to be believed, Apple seems to be on the verge of breaking all ties with its competitor, search engine giant Google, which also happens to be the developer of the Android platform. The Cupertino company is apparently excluding the Google Maps app from iOS 6 and coming up with a similar version of its own.

According to 9to5Mac, the application that Apple is developing may look a lot like the Google version, but will boast of a cleaner and faster interface. The mapping database is being designed with the help of the recently acquired companies, Placebase, C3 Technologies and Poly9. It may now be called as Maps and the company will drop Google from the name for obvious reasons. And since it’s a new application, it is bound to have a redesigned logo that may appear very like the current iOS logo. Reportedly, it will continue to depict the company’s 1 Infinite Loop Campus, but with a different color scheme.

The Google Street View feature will also be replaced by the company’s exclusive version, which is being developed by C3 Technologies. And if that’s not enough, Apple has even incorporated a 3D mode in its edition of the Maps application, which is not active by default, but requires users to click the dedicated button to enable it. The inclusion of the 3D mode has also been built by C3 Technologies.

The new Maps application will most probably be made public along with iOS 6. The unveiling of Apple’s next generation operating system is slated to take place during the month of June, this year.