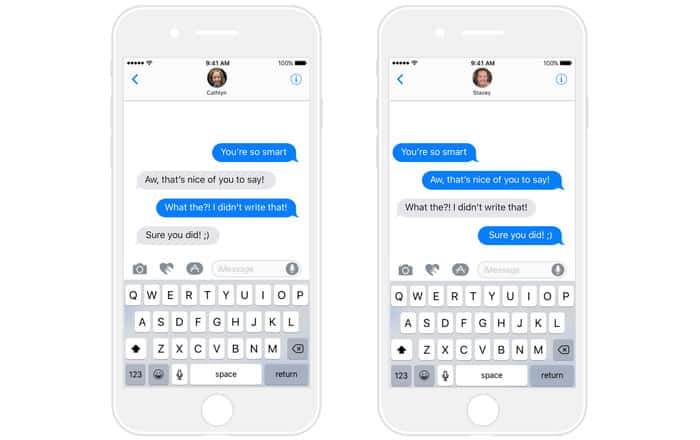 Apple’s latest iOS 10 brought along a number of changes, most prominently in Messages which got a bunch of new skills and a dedicated App Store. However, the tech giant is coming down hard on the latter’s top-ranking paid app, a prank tool called Phoneys.

The concept behind Phoneys is simple but pretty clever. The app offers a set of stickers which resemble iMessage bubbles complete with a matching font and blue layout. Phrases vary from ‘Can I have your autograph?’ to ‘You’re so smart.’

To utilize them, all you have to do is select one of the sentences and drag it over to your friend’s message. The sticker covers your contact’s actual message, making it seem like they sent it. The results come across as very convincing, especially since they mirror Apple’s format so closely.

Also Read: Apple tracks your iMessage contacts, could share them with police

Unsurprisingly, Apple’s not very happy about this state of affairs. In a Medium post, Phoneys creator Adam Howell claims the company got in touch with him over the app. Its lawyers aren’t pleased with the fact that the application got through the review process.

Apple apparently maintains that the stickers can’t be blue or green, use the San Francisco font, and be marketed as a prank app since it doesn’t approve of such tools. The brand is not going to forcefully pull the application though. It’s giving Howell until October 6 to fundamentally alter the app so the bubbles don’t actually look anything like its own.

Howell asserts that he’s still undecided as to whether he should make Apple happy and lose the entire spirit of the app or stop updating so the company pulls it. The latter choice would allow users who have already paid for the tool to continue fooling people but would put an end to add-ons.

You can try out Phoneys for yourself by buying it for $0.99 via the App Store.