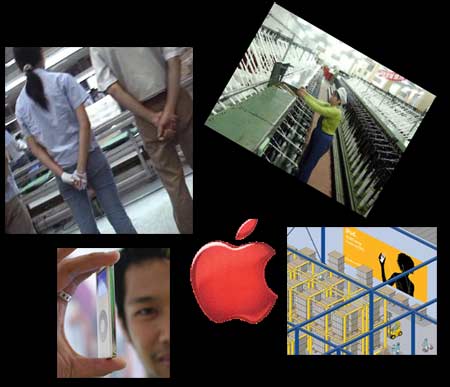 Apple had announced a while ago, that it would be investigating a newspaper report that said that some of the staff in its Chinese iPod factories were working long hours for low pay and in “slave-like” conditions. Now, in a statement on its website, Apple said that after reports emerged of poor labor conditions it found violations of its Code of Conduct. Apple sent an audit team to investigate labor standards and randomly interviewed around 100 employees.

While Apple said Foxconn was “in compliance in the majority of the areas audited,” it did find violations and “areas for improvement” it is working to address. Foxconn is also known as Hon Hai and makes computer equipment for a huge range of companies including Dell, Intel, and many others.

Apple found no evidence of the use of child or forced labor. Apple uses 15 percent of a manufacturing facility with 2,00,000 employees. It inspected a wide range of dormitories, but said that the living conditions of three leased dorms weren’t satisfactory. Two dorms had a large number of beds and lockers in an open space.

Workers earn at least the local minimum age, but the pay structure is unnecessarily complex and is hard for employees to understand. But, Foxconn has now fixed this.

There was no forced overtime, but the biggest complaint was to do with overtime. Two employees reported that they’d been disciplined by being made to stand to attention.

“The supplier has launched an aggressive manager and employee training program to ensure such behavior does not occur in the future.” This would be a different aggressive manager from the one that makes people publicly stand to attention, we guess.

Apple has now hired a firm to audit all of its suppliers and keep an eye on what’s going on.