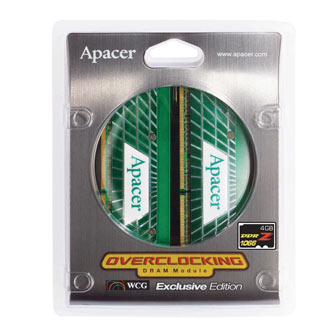 Apacer Technology has launched the world’s first 4GB (2GBx2) DDR2 1066MHz high frequency, high-capacity, low latency over-clocking memory module kit. This introduction happens to be a first of many kinds for the module vendor as it happens to be the first to achieve DDR2-1066 frequency with single-stick (2GB) memory modules, while retaining a 5-5-5-15 ultra-low-latency timing scheme. Further, PC game enthusiasts will be exposed to this technology for the first time ever, and will surely satiate even the most demanding and hardcore gamers’ appetites.

This superior-quality die is combined with first-class PCB, after which memory module production begins using advanced Surface Mount Technology. Then, all modules undergo dual-channel burn-in testing for an extended period of time.

Here are great reasons why PC gamers would love to get their computers running on Apacer’s latest memory module:

As of now, Apacer hasn’t released any details regarding its price and availability. But, we are sure that in time PC manufacturers will seize the opportunity to release PC gaming-dedicated machines rigged up with Apacer’s latest memory module kit.