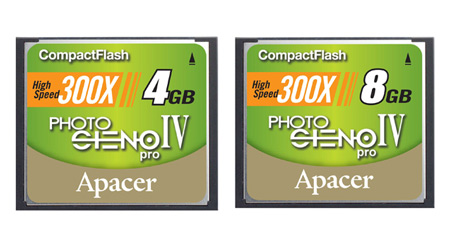 As of now, the Photo Steno Pro IV 300X CF card is available in capacities of 4GB and 8GB.

Also included on this card is an error-correcting code (ECC) feature for auto-detection and auto-correction of errors. And, it is these features that add to the already excellent read/write performance of the Apacer 300X CF card. In case you are wondering, the card’s read speed is 47MB/sec while the write speed its 36MB/sec, which allows for support for UDMA mode on high-level digital cameras.

Thus, professional photographers will benefit from using the Apacer Photo Steno Pro IV 300X CF card due to its super speed and super capacity that allows users of high-resolution professional cameras to enjoy high-speed photo shooting. They will also not have to wait for the lag between shooting and data transfer, nor will they have to worry about inadequate storage space.

And, if you are worried about compatibility, then you must know that the Apacer 300X CF card has passed compatibility tests of over 100 of the most commonly used DSLRA and DSC cameras.

Lastly, the Apacer Photo Steno Pro IV 300X CF card uses the latest dual-channel technology which means that the controller transfers data in two channels, which is different from the single channel transfer of conventional CF cards to deliver double bandwidth and double the efficiency.