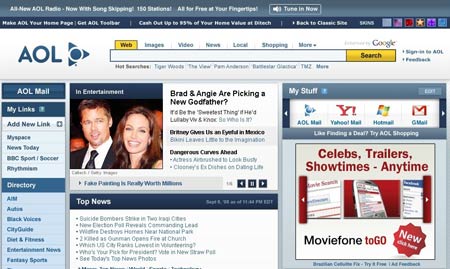 AOL announced a new feature on its portal which allows users to access multiple email services from one convenient online location. The new feature enables more control over the site’s displayed content and services, giving users the ability to add their own web links in the main navigation bar and access custom feeds from social networking services, local news, and RSS enabled sites directly from the main page of AOL.com.

The introduction of the new service will allow users to access their email services from Yahoo, Gmail and Hotmail. Of course users can also use their AOL and AIM Mail. All these options are now available on AOL’s homepage.

Speaking about the new venture Bill Wilson, Executive Vice President of Programming, AOL said, “With the launch of mail aggregation, AOL will be the first among the big traditional portals to offer a centralized email experience.”

“We know that consumers today have multiple email accounts on different services to keep tabs on daily, and we want to make it easier for them. This is an important first step in opening up AOL.com and giving users the ability to populate the AOL.com homepage with content and services they use on a daily basis, regardless of where it lives,” commented Wilson.

AOL also said that this new feature was its first step in the way of third party content and services compatibility.