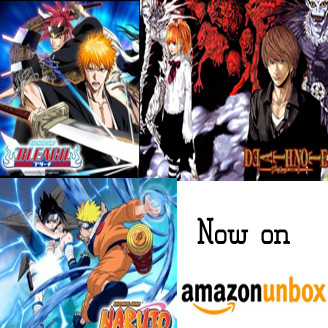 Naruto Uncut, Death Note and Bleach are all available as episodes that cost $1.99 each.

Initially, Naruto Uncut will feature episodes 1-25 which are dubbed and Bleach too will offer episodes 1-25 dubbed, while Death Note features the full series dubbed.

Further, to celebrate the tie-up of Amazon Unbox and Viz Media, users will be entitled to one free episode from all three anime series. This offer is however, available until January 31, 2008 only.

“VIZ Media has had a long and successful retail relationship with Amazon.com and we are excited to team with its premier digital download channel, Unbox, to make available some of the hottest animated series sweeping North America,” said Liza Coppola, Senior Vice President, Marketing , Viz Media.

“We are committed to maximizing the ability of the dynamic medium of digital delivery to bring hot series like NARUTO Uncut, Death Note and Bleach to fans who want the flexibility and convenience of digital downloads,” added Coppola.