Anime Culture: The Inside Story about Anime Fans, Fan Art and More 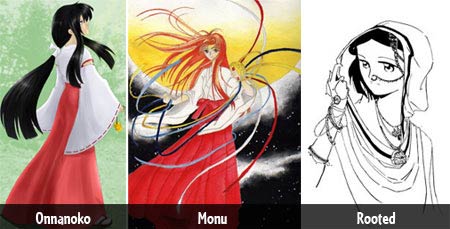 Anime, which has its beginnings in Japan, has been well-received by almost every country in the world now. In India itself, the Anime scene is a fast-growing one.

We already have Animax that airs great Japanese Anime shows day and night in India. Online discussion forums dedicated to Anime are also mushrooming, giving like-minded people a platform to connect through.

Not only that; art books and magazines on Anime, OST CDs, feature films, Anime games documenting the creation of Animes and tons of merchandise like figures, wallscrolls are also available .However, in India you may manage to find just a handful of Anime DVDs and Manga found in stores which are genuine releases and not bootlegs.

We have the ‘Animestan’ and ‘Animax’ forums that have garnered multitudes of enthusiasts and anime Otakus alike. In case you are wondering, an ‘Otaku’ is actually someone who is an anime fan. However, in Japan the term Otaku is a kind of insult, as it refers to a person who is so involved with a particular type of anime subculture, that he or she becomes obsessed!

Yes, if you meet an anime fan, you will surely think that he or she is totally obsessed with anime, because that’s how they are. Apparently, once you get hooked onto an Anime you can relate to, you will soon become an Otaku too. 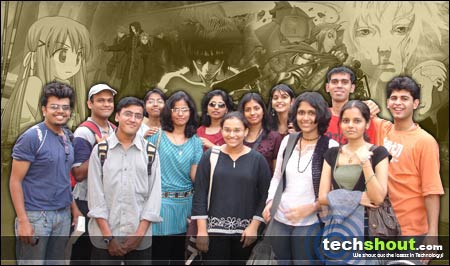 But jokes aside, the anime culture is worth exploring. We recently attended an anime meet in Mumbai that accommodated the members of the ‘Animax’ forum together with the ‘Animesthan’ forum at a restaurant in Bandra.

Present at the meet were several young live wire boys and girls who were discussing their favorite anime, manga and more. One girl who really caught our attention at the Mumbai Anime meet was Smita, who sketches anime characters so well that she deserves to be given the chance to create her very own anime series! At the end of the meet, an otaku who was present also distributed anime CDs to those who were present.

A large number of Anime fans also create fan art of their favorite manga and anime shows. They submit their drawings on online forums for the rest to enjoy.

Anime has indeed been received really well in India. Anime meets are held everywhere in India from Mumbai to Chennai to Pune. Some of them are even sponsored ones that gift merchandise to the attendees.

Elsewhere in the world, huge anime conventions are held. At such conventions, like-minded people gather to watch anime, to check out the latest anime series and even to have a look at each others’ costumes. Yes, for at most of these convention people dress up as characters from manga and anime. It is called ‘cosplay’, which is a blend of the English words “costume” and “play”.

So popular is the anime culture worldwide, that such ‘cosplay’ events not only take place at conventions, but on a daily basis too at cafes that cater to devoted anime and cosplay fans. The waitresses at these cafes are even dressed as super-cool looking anime characters.

Since the whole Anime scene originated in Japan, it’s no great wonder that bits and pieces of the Japanese culture can be seen in many Anime. The music too has an edgy Japanese feel, so do the characters that look way ahead of their time. You must surely have seen real life in Japan on many a travel program, which show Japanese youth with spiked hair and crazy gear.

Also, most Anime are originally in Japanese with English sub-titles. It’s best kept that way because when dubbed, some of the meanings tend to be received in the wrong context and besides, the Japanese language does sound nice to the ear, even if you cannot understand a word. It kind of retains the authenticity and originality of the series.

Original anime released in Japan on DVD or broadcast only have Japanese voices and no subtitles. These are called “raws” (original source material) by the fansubbers. Fansubbers then add english subtitles and release them on net. Although this is not legal.

The Matrix, a hugely popular sci-fi flick had inspired Korean and Japanese animators to create Anime based on the movie. Called ‘Animatrix’, these animators managed to sum up the entire movie in ten individual videos with loads of semi-nude fighting women, crazy stunts, gravity-defying action and a whole lot more that could not be accommodated into a real-life movie, perhaps due to limitations of the human race! But in an animated version where there are endless possibilities, the characters can be made to do whatever the creators so desire.

Many of you who have been seriously watching Anime, will realize that no matter whether the character plays the good guy or bad guy, you can relate to them in some way or the other. And I guess that’s what makes you want to watch the next episode and the next and the next, till you’ve reached the end of the series.

Very interesting story lines, well developed characters, artistic graphics, cool music with fantasy, action and adventure all packed into one package- that’s the stuff most Anime are made of.

While some Anime are entirely hand-drawn, computer-assisted animation techniques have also become popular in recent times. Over the years, since the characters have improved as well as the artwork and aesthetic backgrounds, this tends to visually set Anime apart from other forms of animation.

Although India has yet to see huge conventions dedicated to Anime in its entirety, we have to realize that we are fortunate enough to be able to get access to this wonderful form of entertainment.

In other countries, where ‘cosplay’ is in full form, there is much room for freely expressing oneself, and therefore people tend to live out their fantasies. In time, Anime will be given its due importance in India, as it is a fast growing scene and we are sure that many will get as intrigued as we were, when we just got initiated into the world of Anime.

There is a wealth of information regarding Anime culture on the Internet that is sure to satiate your senses. From Anime downloads, to Anime dictionaries that contain words that are frequently used in Anime, to Anime merchandise (which of course will require you to shell out some money), the Internet will provide you in abundance with everything you need to be a part of the Anime culture.