A frustrated Apple customer took matters into his own hands in a bizarre incident which took place in the company’s Dijon outlet in France. The man can be seen in multiple videos smashing up iPhones and a MacBook one after another with what seems to be a metal ball.

The angry patron began his rampage by calmly laying down iPhones flat on the table and then destroying them with a heavy steel ball which 9to5Mac says is utilized in the French game Boules. He demolished at least 10 iPhones in such a manner before directing his attention to one MacBook Air.

The disgruntled man interspersed his destruction with angry rants about his consumer rights. According to some publications, he’s accusing Apple of refusing to honor EU requirements to guarantee a two-year warranty for all goods. Thankfully, he reserved all his frustrations for the products and not any humans hanging around in the store based on the fact that there aren’t any reports of injuries.

Also Read: Thief dressed as Apple employee walks off with $16000 in iPhones

The irate protestor was later apprehended by mall security and prevented from re-entering the Apple Store by the outlet’s employees. He didn’t stay put though, attempting to make a run for it. He was caught immediately and made to wait for the police.

Apple probably won’t take this lying down, which means the man’s actions could cost him thousands of dollars. Smashing iPhones to smithereens is an expensive business and the chances of the company going to court to recover the damages are very likely. 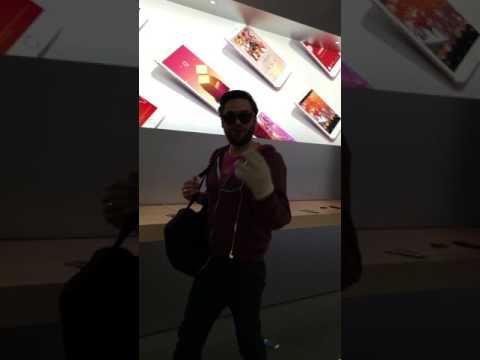