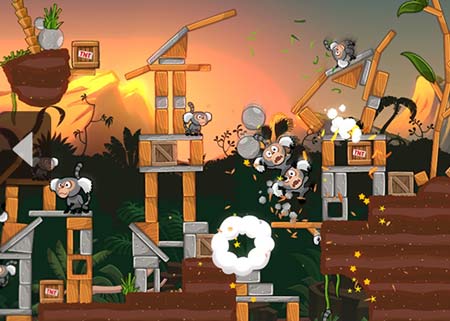 Rovio seems to be having an eventful week with Angry Birds Trilogy being announced by Activision Publishing and Bad Piggies all set for a launch tomorrow. The former can be picked up through Amazon, Target, Best Buy, ToysRus, Walmart and GameStop in the US.

The entire list of countries besides the US in which the package is shipping covers the UK, Australia, Belgium, Denmark, Finland, France, Germany, Italy, Netherlands, Norway, Russia, Spain and Sweden. Angry Birds, Angry Birds Seasons and Angry Birds Rio are part of the bundle which is being sold for Xbox, PS3 and Nintendo 3DS.

It’s the first time ever that a Rovio title will be catapulted onto a console and accompanying the collection are HD animated cut scenes for that extra dose of fun. The Trilogy contains 19 episodes and each embraces an exclusive new level. And of course, trophies or achievements will pop up now and again just to encourage the bird-slinging fanatic within.

Now moving onto the pig-flinging title that the Finnish developer is about to unleash upon us all very soon, the gameplay mechanic has been rethought and so has the plot. Here, players get to step into the skin of the ‘bad guys’ and steal the birds’ eggs. The idea is to put together various contraptions and help the mean green critters to satisfy their palates.

The Angry Birds Trilogy price in the US is $39.99 for the Xbox 360 or the PS3 version and $29.99 for the Nintendo 3DS one. As for Bad Piggies, enough has been said about it to have any Rovio fan rubbing their hands in anticipation.