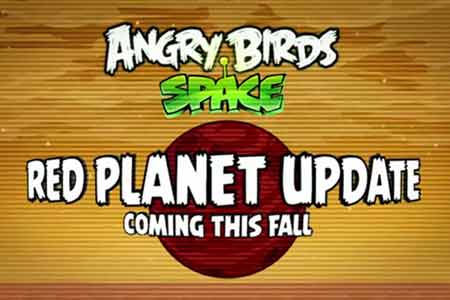 Cashing in on the popularity of the Curiosity rover, Rovio has announced the Angry Birds Space Red Planet update. The adorable and always annoyed birds will be taking a flight to Mars this fall.

The company has released a short trailer to disclose its plans regarding the inclusion of the red planet in its Space version. As MobileSyrup reports, the video clip refrains from disclosing any detailed information about this new season. It is unclear if the Mars edition will be released as an independent game or an extension to the existing season. But considering that Rovio is calling it an update, it will most probably be a part of the latest Space game.

The developer in question already has a number of seasons of Angry Birds to its credit. After the introductory game, the franchise was expanded with Seasons episodes which were followed by Angry Birds Rio. The most recent addition to it was Angry Birds Space.

These titles are already available on various platforms including the web, Android, iOS, BlackBerry, Windows Phone and Nokia amongst others. Only recently, the birds made their debut on Facebook too. In addition to this, Rovio has also designed another physics-based game titled Amazing Alex that was released for Android and iOS platforms over a month ago.

Besides a short trailer of the Angry Birds Space Red Planet update, Rovio hasn’t divulged anything about the Mars version of the game. Whether it will be a free update or a paid in-app purchase is also not known.