The very recently released Angry Birds Space now claims over 10 million downloads worldwide. These figures are supposed to be inclusive of downloads across platforms covering Android, iOS, Windows and Mac.

Launched on March 22, the game was being teased by Rovio for weeks before that. An announcement about it was even made from the International Space Station. Being able to boast of 10 million downloads within three days of release is undoubtedly a significant achievement for the developers. But this latest announcement was made through a contrastingly small, though equally noteworthy post of two sentences on Twitter, says a GameSpot Asia report. 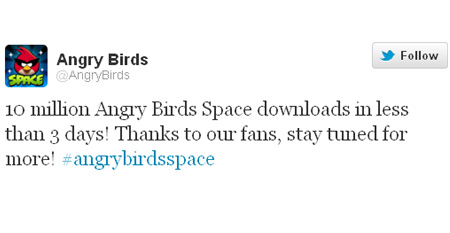 “This is Rovio at its finest, and we are more than excited to bring Angry Birds Space to all our fans worldwide,” commented Mikael Hed, CEO of Rovio during the launch of the company’s second biggest game. “This launch marks a huge step for us as a company, and our whole team and partners have really pulled together to bring out a fantastic array of exciting products and experiences. We hope that our fans will find all things Angry Birds Space as delightful as the Rovio family does.” 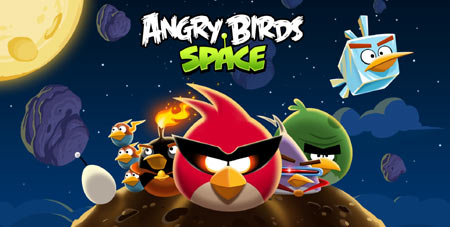 The new game takes the birds into outer space, where the laws of gravity don’t apply. This implies some changes in the overall gameplay, which make it interesting and fun. A new ice bird who breaks the pigs’ fortresses by freezing them, has also been introduced. Apart from this, the regular characters have undergone some pretty endearing makeovers while transiting from earth to the cosmos.

With more than 10 million downloads under its belt, the Angry Birds Space game can be availed of on iOS devices, Android smartphones or tablets, Mac as well as Windows PC.