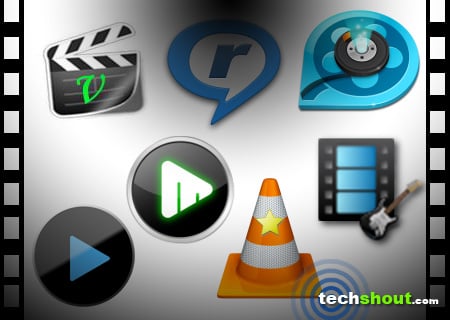 We’ve picked these 7 best Android video players not only for their high ratings or popularity on the Android Market, but also based on factors such as the interface, ease in navigation, multiple format support, playback quality and various other features. So, you can now say goodbye to those viewing limitations that the Android platform or your device may possess. Also, most of the applications we’ve about to mention are free.

Unlike most people who watch videos in their native language, there are some that have a liking towards foreign content and mostly rely on onscreen scripts to make their way through the film. With that being said, the MoboPlayer app comes with support for subtitle files such as SRT, ASS, and SAA as well as others that are built in various formats like MKV, MPV, MOV and many more. This Android video player also holds compatibilities for rendering multiple audio streams and multi-subtitles. Besides these, you can stream content through HTTP or RTSP protocols for viewing videos online. And when it comes to playback, Mobo Player can display files that are encoded in almost all formats with the help of software decoding. For compatibility reasons, MoboPlayer requires your device to run on Android 1.6 or later. 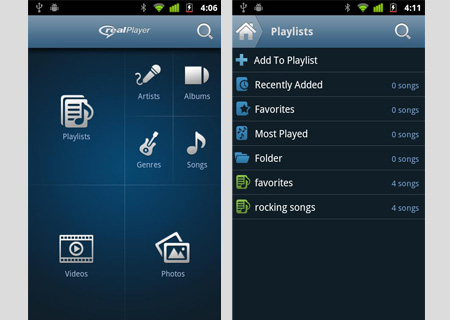 Surely you’ve all heard of RealPlayer? Well if you haven’t, the company has been persistent for a long time on various platforms such as mobile phones, Windows, Mac and Linux operating systems as well. Feature-wise, its Android sibling has a handful in offerings which include an intuitive user interface, widgets, content folder selection and a playlist editor. So, by now you should have figured out that in addition to video, the app can play music files and allow you to view images as well. When it comes to media support, RealPlayer is capable of displaying content in any format that’s natively compatible with the smartphone. RealPlayer Beta supports Android 1.6 and future releases. 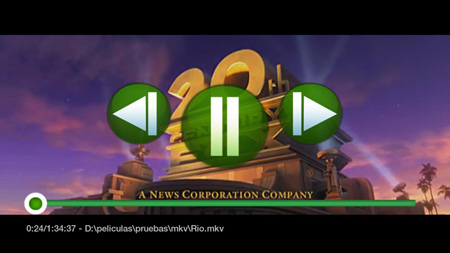 Amongst our recommended Android video players, V-Direct holds the most distinguishable characteristics. For starters, it’s no ordinary media application. Through its capabilities, you can directly stream content from your PC to a smartphone without even thinking about transferring the file to the memory card. So yes, you can say goodbye to low storage problems and the hassle of copying large video files onto the device.

The app also supports .srt files that allow you to add subtitles into a movie or video clip. What’s more, you can stream content from an Android handset back to your computer. So now all your favorite HD movies can be viewed without using up precious memory. VLC Direct Pro requires the Android 2.0 OS or newer to operate.

If you’re worried that your battery is going to drain out whilst viewing a movie, the MX Video Player states to display the current battery status during video playback. Additionally, it lets you scroll through the subtitle text and automatically adjusts the playback position accordingly. Also, you can zoom in or out while watching a video through multi-touch gestures. For viewing movies with subtitles, the app supports SubRip, Sub Station Alpha, MicroDVD, SubViewer2.0, SAMI, MPL2, PowerDivX, TMPlayer and Matroska formats. MX Video Player is compatible with smartphones on OS 2.1 and later as well as Honeycomb devices. 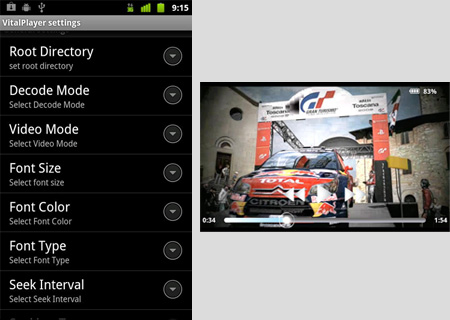 For optimum playback of almost all video and audio formats, VitalPlayer utilizes software codecs to deliver smoothness. And if for some reason the movie won’t play, you can switch between hardware or software modes through the settings menu. The next entrant into our Android video players list allows you to resume watching previous clips if you accidentally exited the app as well as capture screenshots, share files, adjust the brightness and stream content through HTTP or RTSP protocols. Also, subtitles can be viewed in various font sizes and colors. Supported versions include Android 1.6 and up.

Supporting most popular video formats such as AVI, FLV, MP4, 3GP, MKV, MOV and many others, QQPlayer is another simple and convenient video application for Android devices. Through its smart core technology, the app can detect the video format and carry out the required adjustments to ensure a smooth as well as rich playback of high-quality videos on small screens. Additionally, it allows you to switch between multiple audio tracks and also view SRT, SMI plug-in subtitles as well as MKV embedded ones. QQPlayer is compatible with devices running on the Android 1.5 OS or later. 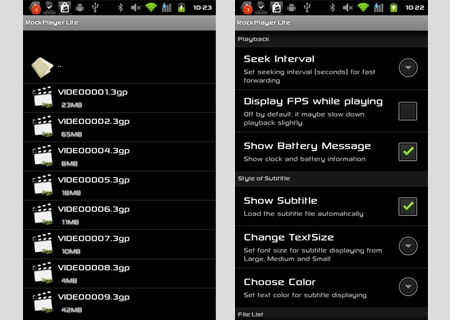 With the device’s hardware decoder and help from the FFmpeg plugin, RockPlayer Lite holds the capabilities of displaying videos in almost any format. Instead of converting movies into the natively supported ones, all you need to do is place your files onto the SD card for the app to recognize them. Additionally, it allows you to stream videos through your browser by simply clicking on a URL. Since this free app comes with ads, you can download the paid version through the developer’s website. RockPlayer Lite supports Android 1.6 and higher versions.

We feel that these best Android video players are liable to replace the Android’s stock media application on your smartphone. But if you beg to differ with us, the least you could do is give them a try, they’re mostly free.