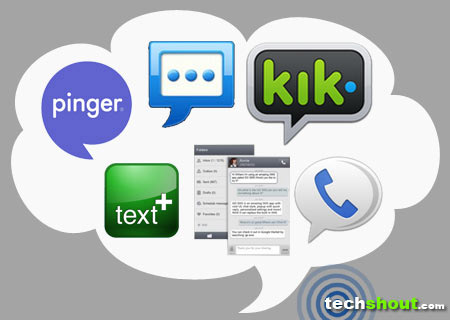 Let’s face it, the holiday season means it’s a good time for you to be hunting down the best Android texting apps if you own a phone running Google’s mobile OS. It’s that time of the year when everyone from your kindergarten pal to the dude you meet at the supermarket expects to exchange the season’s greetings with you. Save the talk plans for your near and dear ones and drop your expensive texting plans for an app which will let you message the supermarket buddy for free, never mind that he’s standing just an aisle away. 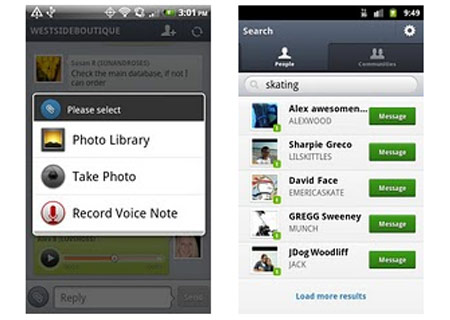 Landing with free app-to-app messaging anywhere across the globe, textPlus should allow you to send texts, MMS messages and even avail of group texting. But it doesn’t limit itself between textPlus-powered phones since users can even deploy messages to 10-digit mobile numbers in the U.S. or Canada. Then there’s a new feature which lets you find Facebook friends employing the service and send voice notes to contacts. 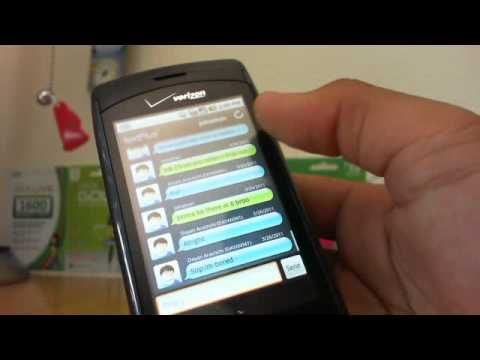 Don’t forget to ensure you have regular text notifications turned off in account settings. Because even though sending/receiving texts within the app is free, neglecting to deactivate the aforementioned means standard message rates will be applicable. The supported carriers cover AT&T, Verizon, T-Mobile, Sprint, Virgin Mobile, Nextel, Boost, Cincinnati Bell and several other operators. Check out the developer website for the full list of supported service providers. 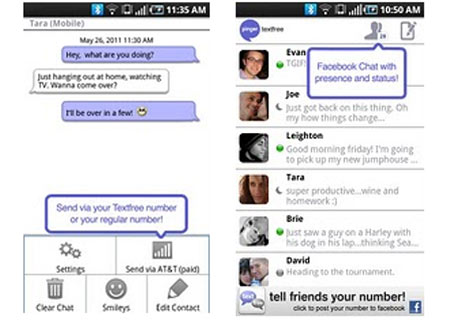 Candidate number two in our Android texting apps roster steers far away from the necessity of the involved parties installing the application on their handsets. Instead, Pinger Textfree offers users their very own texting number which can be wielded to send or receive messages for free. All it needs is a Wi-Fi or data connection and it’ll have your back. You can look forward to Facebook Chat integration when it comes to that endangered species of ‘friends who don’t text’ and notifications for when texts pop in outside of the app.

And if someone calls on your Pinger number, it registers as a miss call so you can sort out the ones who won’t try to remember it’s a texting number even if they’ve been reminded an umpteen number of times from those who don’t mind spending part of their talk plans on you. Messaging outside the borders covers over two dozen nations including Australia, Sri Lanka, Germany, Bahamas, New Zealand and more. 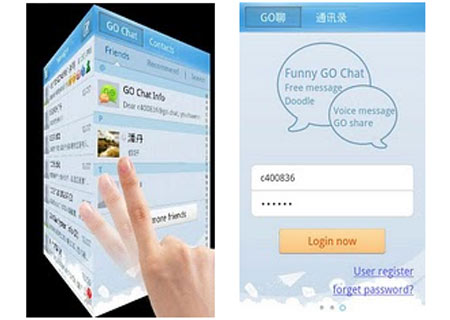 Bringing in full support for Android 4.0 with the latest version, Go SMS Pro delivers SMS as well as MMS support. It’s chock-a-block with a bunch of handy features such as the ability to schedule text messages, accommodation of group texting as well as the ability to sift through messages by time or by order of text sent/received. And the software rubs along easily with 2G, 3G, 4G and Wi-Fi connections for sending files over the Go Share service. For those on a CDMA network, large messages can be split and the support folders view spans Inbox, Outbox, MSS, encrypt folder and created folders. The UI appearance is properly customizable with several DIY themes, changeable fonts and the Theme Maker plug-in. Its v4.01 update strings along the Lite mode and even adds a paid Christmas theme. 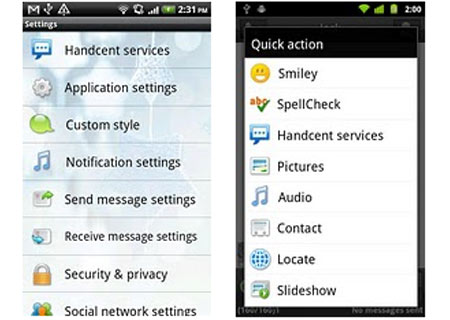 The curiously named Handcent application in our list of Android texting apps says it can have you ‘circumvent the limitations of the Android OS and wireless carriers’. Providing you opt for online integration with your My Handcent Online account, that is. And when you want to catch your friends lying about where they’re busy at when you invite them to your little nephew’s fourth birthday party, you can act like a perfect creep and pin down their location by using GPS courtesy of the Contact Locator plug-in that’s integrated within the app. The in-built security options permit you to password protect and hide individual messages right within the Privacy Box or alternately, secure all of your texts. The cool thing about this is that these protections are applicable not just within Handcent, but also for the regular Android messaging app or any other third party one. As for group messaging buffs, the SMS limitation gets raised to 1,100 messages an hour with this app. 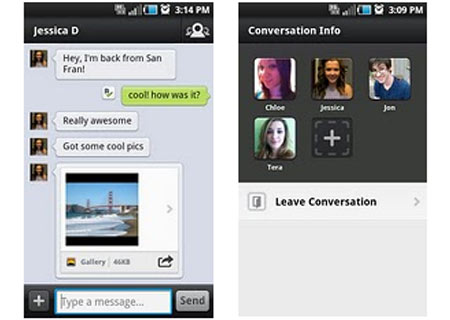 Now not all you pals may be Android loyalists. Here’s where Kik Messenger steps in with cross-platform support that keeps you hooked to your friends in real time. The attributes attached to it are clean and simple. The app will let you send texts, chat and share pictures with friends and family free of cost. It is designed to serve up notifications for when a message is sent, delivered and read.

When you want to indulge in group chats, creating groups while on the move is touted to be as simple as adding friends to conversations. The application also pulls in support for offline messages and push notifications. And you won’t have to deal with advertisements just because the service is for free. 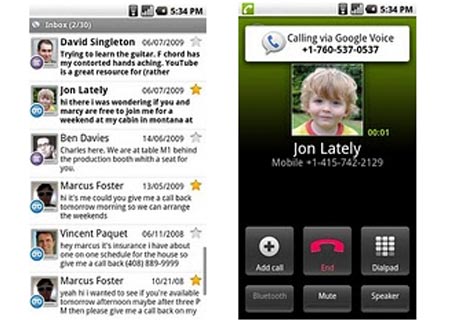 How can we leave out Google Voice from our lineup of Android texting apps when the popular mobile OS is Mountain View’s very own baby. It may primarily be associated with the ability to make calls with your Google number at lowered rates. But the app also sanctions you to send text messages through the service. You can even listen to voice mail and read transcripts from within this app which works with v1.6 or higher of the OS. The last time Google got around to updating the application, the introductions mainly had to do with the text messaging feature. Firstly, it now proffers the convenience to prefetch voice mails so you can listen to them even in areas where there is no data coverage. Apart from that, the software improvements were built to render enhanced text message notifications and even permit sending of texts to multiple recipients.

So there you have it; the best Android texting apps in the market to help you with lowering those monthly phone bills. Give each of them a try and tell us about the ones that worked best for you.