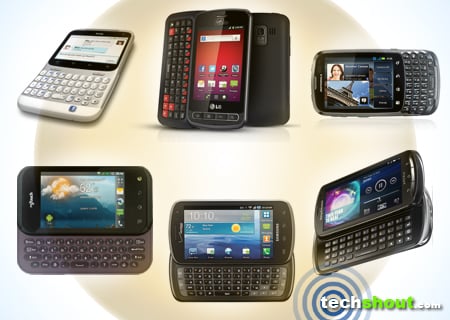 We compiled a list of 6 best Android phones with keyboard because we realize the growing demand for the OS introduced by Google. We also understand that the sophisticated, classy appeal of touchscreens is sometimes just not enough to take over the ease of physical buttons. If you are a fan of this mobile platform but just can’t get over typing on a real keypad, we have compiled a list that’s worth taking a look at. 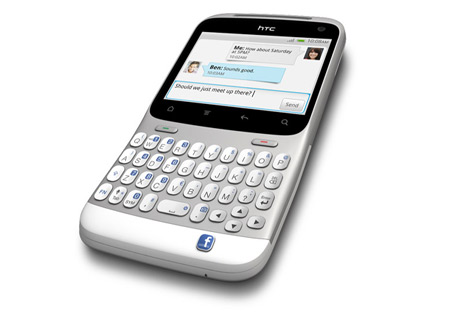 For quite some time now, there have been phones pouring in from several manufacturers as well as network carriers claiming some serious Facebook integration. Well, the HTC ChaCha is one such device. It even enters the scene with its dedicated, blue in color ‘f’ button that sits in place on a silver hued QWERTY keypad. The phone runs on Gingerbread and is obviously aimed at social networking buffs who need to update their status, post comments, and stay in touch with the virtual universe constantly. The handset measures 114.4 x 64.6 millimeters in terms of height and width. On this chassis, the screen size occupies a diagonal space of 2.6-inch, while the rest is dedicated to the pretty well-spaced QWERTY keypad. Another noticeable thing about its device is the slight curve in the lower half of its body. This is probably meant to provide some additional comfort while typing. 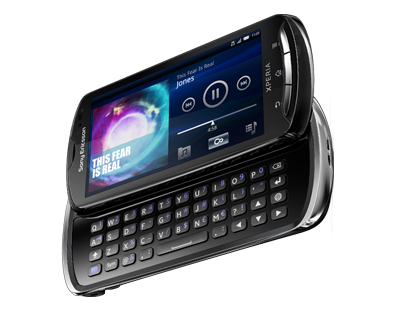 This year, the Xperia lineup from Sony Ericsson got a new addition, one with a keyboard. Of course, that is one solid reason it could compete for our compilation of Android phones with keyboard. The Sony Ericsson Xperia Pro features a slide out QWERTY keypad and is brought forth by the company as a business class handset. But when you don’t have some serious typing or gaming to do, you can just slide back the keypad and use the screen to navigate through its Gingerbread powered system with a simple touch of a finger. And if the business ready phone dipped in a black hue is too serious for you, then it also comes dressed in shades like red and silver. 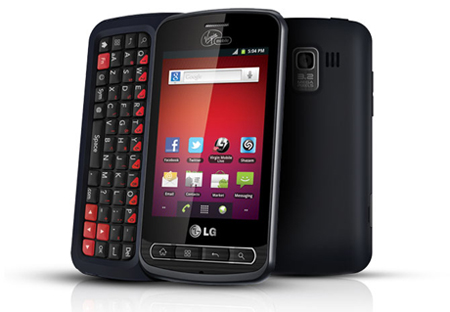 If the Xperia collection boasts of an Android handset with keypad, the Optimus line by LG is not far behind. The LG Optimus Slider is the manufacturer’s venture against competitions in the circle. Currently available with Virgin Mobile in the U.S., the Slider dons a tinge of red on some buttons across the keypad. The front panel boasts of a 3.2-inch touchscreen, while the flip side is adorned with a 3.2MP camera with flash. The benefits coming along with this include unlimited access to Facebook, Android Market, Virgin Mobile Live, and more. The battery offers talk time of little more than 4 hours, and stand by time of up to 12 days and 12 hours. 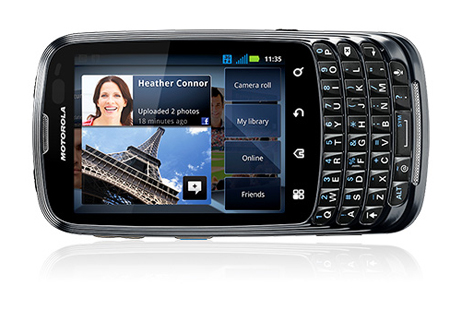 This next one to feature in our line-up of Android phones with keyboard gives some company to the HTC device we saw earlier. The QWERTY keypad of this device finds place on the candy bar form factor itself. The screen with curvy sides occupies 3.1-inch of space on the front panel, while each row of the keyboard is arranged underneath it in a layer-like pattern. But if this design makes you miss the look and feel of a full-fledged touchscreen although you have one in your hands, you can simply ignore the keypad, and concentrate on the four touch sensitive buttons between the display and the physical interface. It also offers connectivity options like Wi-Fi, Bluetooth, 3G, and more. 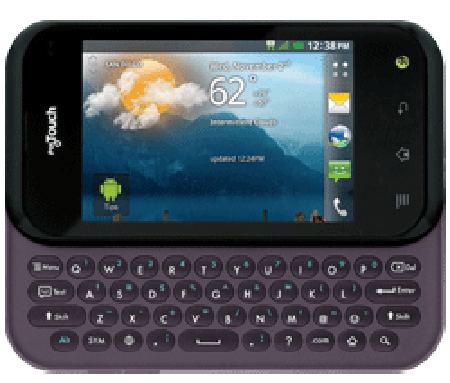 The T-Mobile myTouch Q is an addition to the series of myTouch handsets introduced by the network carrier for the masses who are new to Android or the idea of smartphones overall. So if you are looking for your first smartphone with a keyboard and the pretty popular mobile platform from Google, this one is worth considering. Shaped to appear like a regular phone with touchscreen, the Q is equipped with a QWERTY keypad which slides out on the side. You can pick this offering in colors like gray and violet. The network carrier requires you to sign a two-year agreement before you buy this device. 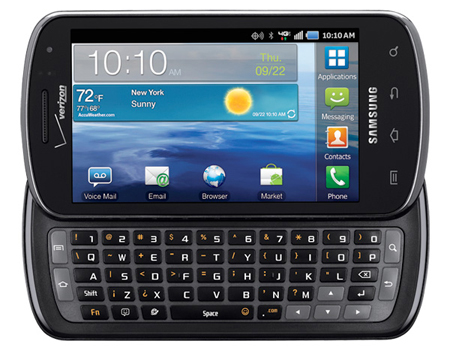 The Samsung Stratosphere from Verizon Wireless in the U.S. is embedded with the 1GHz Cortex A8 Hummingbird application processor from Samsung and offers 512MB of RAM. The device in our compilation of Android phones with keyboard comes equipped with 4GB user memory as well as external memory of the same capacity. If you are a movie buff, it keeps you entertained by providing direct access to Samsung Media Hub which lets you rent or purchase films and television shows.

Our assortment took you through what we thought were the six best Android phones with keyboard in the recent times. With handsets flooding in from various manufacturers all over the world, we are bound to see new features and functions with almost each one of them. But the functionality of keyboards seems to be here to stay so take your pick from our list and revert back to us with your desired choice.