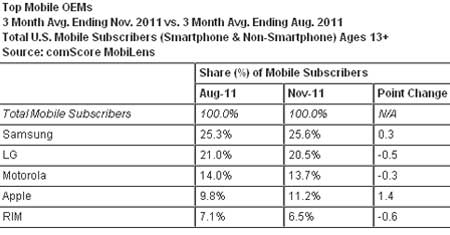 The comScore report for the three month average period ending November 2011 doesn’t really bring in any new surprises, for Android and Samsung have again been crowned as the top smartphone platform and top OEM, respectively. The study took into account over 30,000 U.S. mobile subscribers and found that that Samsung retains its position as the top handset manufacturer with 25.6 percent market share.

Google’s Android share read out to be 46.9 percent which happens to have witnessed a 3.1 percentage increase from August 2011. The OS was followed by Apple, which was seen maintaining the second position with 28.7 percent, the figures going up by 1.4 percent. The third position was grabbed by RIM at 16.6 percent share. Then came Microsoft with 5.2 percent, followed by Symbian claiming 1.5 percent. The last three platforms recorded drops by 3.1, 0.5 and 0.3 percent, respectively. 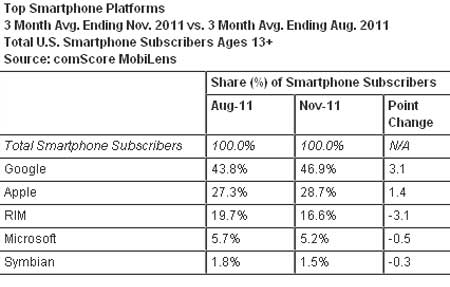 234 million Americans age 13 and older were reportedly using mobile devices for the three month period ending in November 2011. As mentioned above, the OEM market share saw Samsung emerge a winner and this was followed by LG with 20.5 percent share. The third position was taken by Motorola with 13.7 percent share and tagging behind was Apple at 11.2 percent, that’s a 1.4 percentage rise over the said three months. RIM completed the top five circle with 6.5 percent share.

Needless to say, when it came to the mobile content usage arena, texting took a major chunk at 72.6 percent. The activity of employing downloaded apps was indulged in by 44.9 percent of subscribers. Usage of browsers and accessing social networking sites/blogs were reported to be undertaken by 44.4 percent and 33 percent of mobile subscribers, correspondingly. Playing and listening to music was marked by 29.7 percent and 21.7 percent of the surveyed respondents, respectively. 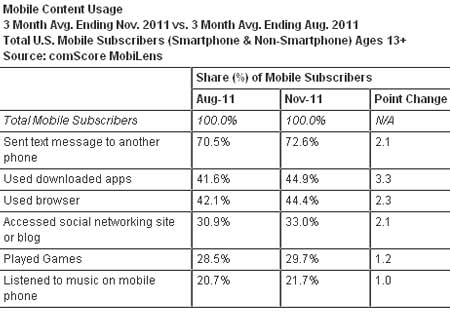 The comScore mobile subscriber report for November 2011 mentions that any reference to data on mobile phone usage relates to a respondent’s primary mobile phone and does not cover data tied to the concerned person’s secondary device.