Google I/O on May 28 may reveal Android M

Android M, the successor to Google’s Lollipop operating system for smartphones is all set to be unveiled later this month at the company’s annual I/O developers conference. This news comes thanks to a detailed schedule of the event that was put up by the Mountain View-based company yesterday.

In it, Google clearly mentioned Android M while describing a developers session slated to commence at 2:30pm PST on May 28, 2015. Moreover, at 1pm on the same day a session named ‘What’s New in Android’ will also be taking place, pointing one more finger towards the high possibility of the unveiling of a new version of the software at the show.

If you’ll recall, Google had showcased the Android L version during last year’s I/O and had released a developer preview of it as well. It waited until October to reveal that the OS will be named Lollipop, while it released the software in November. Since Google hasn’t referred to Android M as Android Marshmallow or any other sweet name for that matter, we’re guessing the same timetable as last year will also be followed this time around. 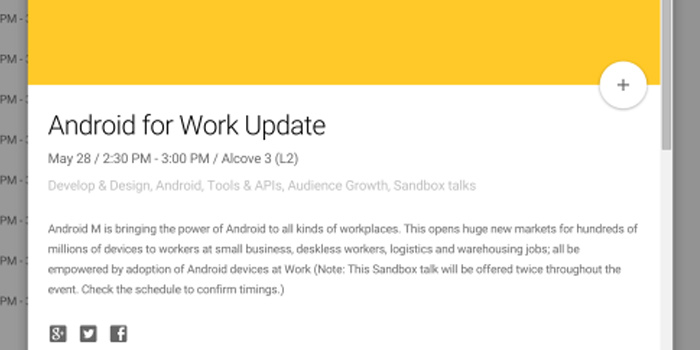 As pointed out by a post made by Android Police, the May 28 session at 2:30pm is supposed to be aimed at an update to Android for Work. Following news reports about the reference of Android M in it, Google swiftly took the listing down, suggesting that it was not something we were supposed to know.

Despite all this however, there’s still no concrete word on what the new Android M version will bring with it. We’re all looking forward to May 28 to find out more on the matter.