Battery consumption is a bone of contention for Android L, especially since so much was said about this factor at the launch event of the said software. Expectants will be pleased to know then that this new version of Google’s OS will feature a significant improvement in its power hogging attributes, according to fresh tests.

The unstable yet beautiful Developer Preview version of Android L which can be grabbed now by software enthusiasts is what has given out the verdict on the OS’ battery life. As compared to a device running Android 4.4 KitKat, the one possessing the upcoming version managed to convey thirty six percent more juice. 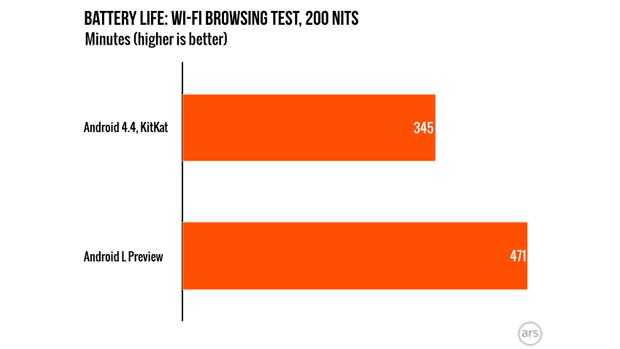 This test was carried out by Ars Technica which claims to have seeped out two extra hours of battery life from a Nexus 5 running the Android L Developer Preview. The picture above is indicative of the result, showing that with equal amounts of brightness and use, the new version of Android managed to deliver additional battery life than the version.

A few different factors are responsible for this, prime among them being Project Volta, a set of tweaks meant specifically for economic power consumption. Among these tweaks are factors like a fresh API for better scheduling of minor tasks, a ‘battery historian’ for improved tracking of battery life and of course, the new ART runtime for apps to play around in.

Apart from all this, Google has also infused a battery saver feature into Android L, thus aping third-party sellers like Samsung and Asus who grant such traits with their software add-ons.