A leaked image has suggested that Samsung is currently testing the Android 4.4 KitKat update on low-cost devices which include the likes of the Galaxy S3 mini, the Ace 3, the Fame and more. It should be noted however that just because the company is testing the update doesn’t mean that it will actually be released in the future.

But hope is still there given the fact that one of KitKat’s main highlights is its reduced memory consumption on low-memory (512MB) devices. Hence, there is a possibility that these low-cost devices which have been equipped with modest RAMs might just be the beneficiaries of a latest Android version. A major thorn in this path has to be Samsung’s insistence of layering the software with its TouchWIZ user interface which in itself is pretty heavy in size. 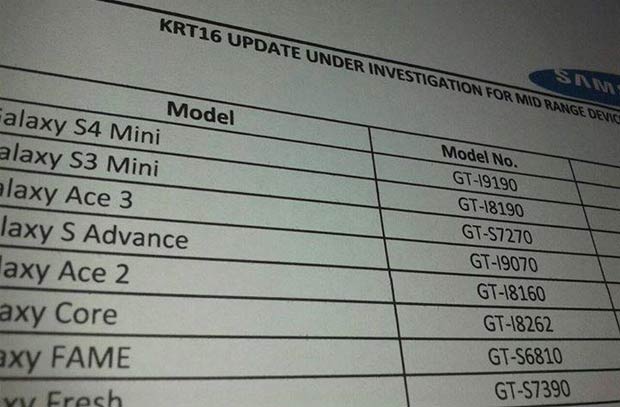 The information about such a possibility has come via SamMobile which has received an image containing a list of mid and low-end devices that are being considered for a KitKat update.

Among them are the Galaxy S4 mini and the S3 mini which are most likely to get the said update. Moreover, the list also comprises of model names like the Galaxy S Advance, Ace 3, Core, Fame, Ace 2 and Fresh. As can be seen in the image, the list may be longer, but the source has managed to capture just these many names in the clicked image.

Even as we talk about Android 4.4, its successor, dubbed version 4.4.1 has already started making its way to Nexus devices, equipped with better camera options and a few little tweaks here and there.