HTC has been quick to deliver software updates this year. The company has already bumped the unlocked version of the flagship One to KitKat along with the Google Play Edition and Developer Edition phones. Next in line are the carrier models in the US which have already received certification and are now in the integration stage.

Thanks to a software update page from HTC which was brought to notice by CNET, we know that it isn’t going to be a long wait for the One smartphone to receive an update to Android 4.4.2 KitKat. So far, the new firmware has been granted certification for the AT&T, Sprint, T-Mobile and Verizon models. And when we last checked, only the magenta carrier is still to enter the integration stage. 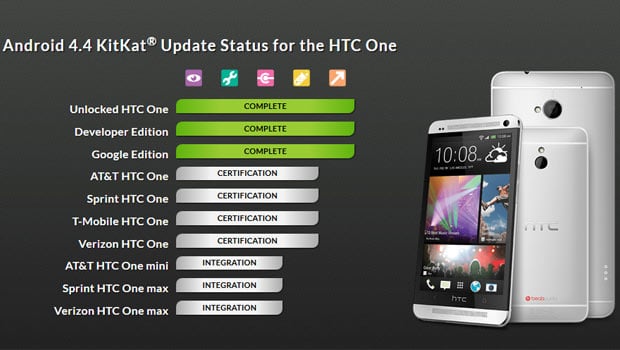 The software update should start rolling out any day now and we’re still waiting for a concrete release date from HTC. Additionally, Android 4.4 has been certified for the Droid DNA on Verizon and it’s in the integration stage for the Desire 601 on Virgin Mobile. Other devices being updated are the Evo 4G LTE that’s receiving Android 4.3 Jelly Bean, while the One X on AT&T will get a taste of version 4.2.2 as soon as tomorrow, courtesy of Mo, the company’s Executive Director.

HTC recently confirmed that the One X and One X+ smartphones won’t be updated any further than Android 4.2.2 Jelly Bean. No specific reason for this decision has been provided. The software update website from HTC also provides information on what stages a firmware goes through before it can be pushed to devices.

If you want to stay updated with information on new software updates from HTC, be sure to bookmark the support website.