The Android KitKat 4.4 OS is fairly new to the market and currently only has a 1.1 percent share amongst all the Google-certified gadgets. But the Mountain View-based company has already developed the version 4.4.1 of the platform which will soon be rolled out for the Nexus gadgets and a select other smartphones.

The guys over at 9to5 Google have come across analytics which clearly reveal that a new version of KitKat is in the offing and is already running on a number of devices including the Nexus 4, 5 and 7. Even though the Nexus 10 cannot be seen in the chart here, we are sure it too will be one of the first few lucky gadgets to get the new update. 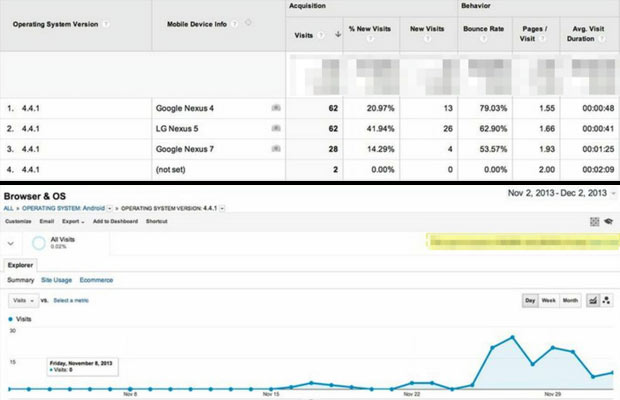 Apart from the Nexus devices, there are a few other phones as well as tablets that are getting the Android KitKat 4.4 OS. These include the Google Play editions of the Samsung Galaxy S4 and the HTC One. And a tweet by a Twitter handle called @LlabTooFeR has revealed that this HTC smartphone will be getting the said OTA upgrade in the near future. And of course, we are expecting it to make its way to the S4 as well.

A number of other devices are slated to receive the KitKat update and this particular list of gadgets includes the original HTC One, Moto X, Sony’s high-end phones and Tablet Z, Huawei Ascend P6, LG G2 and many more. But what remains to be seen is when these gadgets will be lucky enough to get the new iteration of the OS.

No official details have been revealed about the Android KitKat 4.4.1 as yet.