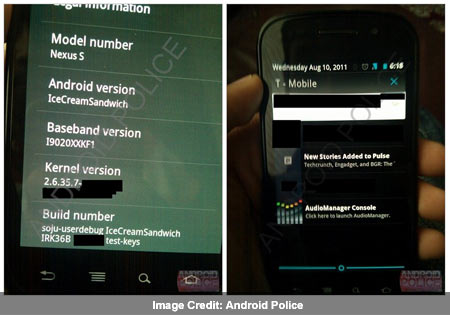 The folks at Google may have thought they were protecting the upcoming Ice Cream Sandwich version of Android pretty well, until the leaked screenshots pictured above surfaced at least. The unofficial sneak peek into the mobile OS is seen on the display of a Nexus S phone.

Appearing to show a lot of blue color, the UI is said to have been pushed through a few significant tweaks. And the notification bar is enjoying a complete overhaul for the first time since Éclair, says Android Police who has posted these shots of the OS. They’ve even mentioned RootzWiki who has managed to grab a couple of exclusive images covering the app drawer and launcher.

Cited to be build number IRK36B, the unconfirmed pictures of the Android Ice Cream Sandwich don’t tell the whole tale. Apparently, the camera can be expected to come equipped with a panorama mode. Owing to the fact that it’s the UI which has mainly received the changes, Android devices less than a year old could be capable of running the OS.

Gmail is touted to have gone under a total revamp to match the OS’ design. Another bit of news that cannot be corroborated at present says that the Nexus S will be treated to the Ice Cream Sandwich update after the Nexus Prime. For those who need to jog their memory, the Prime is rumored to be the first handset running the forthcoming Android version and manufactured by Samsung.

And just as usual, Google will not deign to comment on the leaked pictures of Android Ice Cream Sandwich. They’re too busy with Google+ Games.