Android is going 64-bit and Intel will lead the way, others to follow suit

Apple took everyone by surprise when it launched its 64-bit A7 SOC with the new iPhone and while few called it a gimmick, almost every chip maker is now onboard to deliver 64-bit architecture for future use in Android, Intel being amongst the first.

According to CNET, Intel is already preparing to deploy its 64-bit Bay Trail Atom platform for Android. This news was confirmed by Hermann Eul, Intel’s mobile and communications group general manager. A representative also went on to demonstrate a 64-bit kernel being powered by the Bay Trail architecture on Android. Tablets powered by the new processors will be able to deliver better graphics and also over 10 hours of battery life. 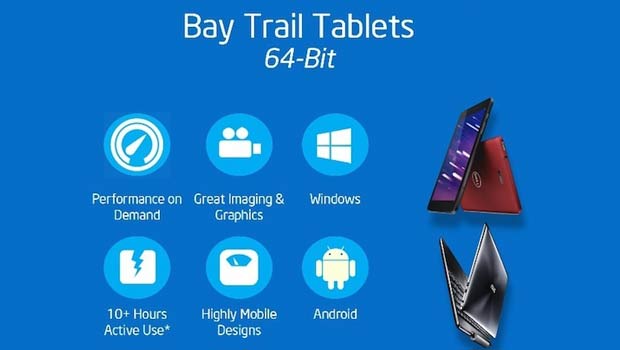 The Bay Trail SOC marks the fourth generation of Atom processors. It’s based on the tri-gate 3D 22nm process and feature quad cores. The biggest improvement here is low-power consumption which delivers better battery life in tablets and laptops. One of the main improvements we’ll see with the switch to 64-bit is support for system memory higher than 4GB.

Qualcomm is said to be working on a 64-bit Snapdragon chipset, while Samsung could launch its next generation flagships supporting 64-bit architecture. There’s nothing from Nvidia as yet, but chances are high that the Tegra 6 (Parker) which is rumored to arrive in late 2014 or 2015 will be based on the ARMv8 and Maxwell graphics. Now, while all of this is great news, such processors won’t be viable until Google implements 64-bit support into Android.

Intel notes that the 64-bit Bay Trail chips for Windows will be during Q1 of 2014 and the Android versions will arrive soon after.