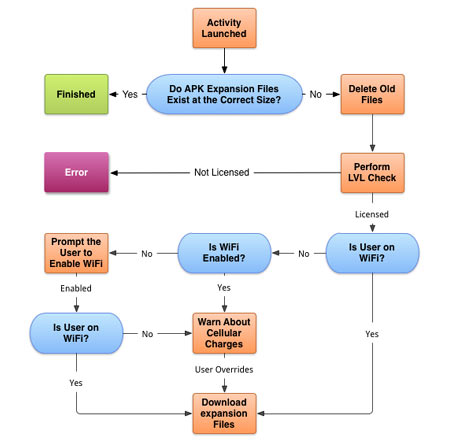 Android apps that have traditionally never crossed the limited size of 50MB will now be seen expanding up to 4GB. The former size is what makes a number of apps easier to download and launch since each megabyte only adds to the time required for carrying out these activities. But particular applications that feature 3D or HD content require more local resources to function seamlessly.

The APK files will still be limited to 50MB for secure on-device storage, while the expansion files can now be attached to it. Every offering may now have two attachments, each up to 2GB. The total size of the software as well as the download will be displayed before users install or make purchases for the same. Besides more room, another plus for developers is that the virtual market itself will play host to these attachments.

“Because many developers may not be used to working with one or two large files for all of their secondary content, the example code also includes support for using a Zip file as the secondary file. The Zip example implements a reasonable patching strategy that allows for the main expansion file to ‘patch’ the APK and the patch file to ‘patch’ both the APK and the main expansion file by searching for asset files in all three places, in the order patch->main->APK,” shares Kenneth Lui, Android Developer Ecosystem via the official Android Developers blog.

Needless to say, avid players can look forward to enhanced gaming experiences, which Android apps should now be able to bring in.