It was back in February that Google announced Android 5.1 Lollipop for its Android One project in India and now nearly a month later, we’re finally seeing the update start to roll out to users. OTAs for all three handsets, the Micromax Canvas A1, the Sprice Dream Uno and the Karbonn Sparkle V, are now available.

Well, OEMs are gradually rolling out the new OS to customers and devices are being selected at random. Basically, is could take as long as a couple of weeks before it reaches you. But there is a way to improve your chances of getting Android 5.1 on your Android One smartphone and that’s by making sure you’re connected to a Wi-Fi network as often as possible. 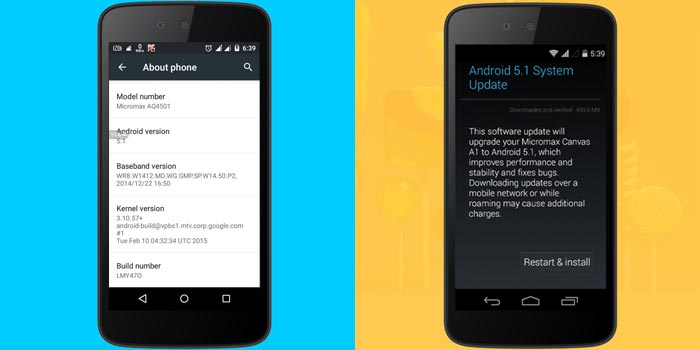 The second option is to manually download the OTA update and flash the firmware on your phone itself. This procedure doesn’t involve rooting your phone as it uses the official OS and the stock recovery. This XDA thread has the necessary files and a guide on how to update your Android One smartphone.

As you probably know, Google is skipping the initially Lollipop release by bumping you straight to version 5.1 from KitKat. It’s certainly well worth the wait as most devices will not see the new OS for at least a few more weeks. For more information on what Google’s latest platform has to offer, be sure to check out this link.

As mentioned above, be sure to keep your Android One device connected to Wi-Fi as much as possible to improve your chances of getting the Lollipop 5.1 update.