The HTC One and Samsung Galaxy S4 Google Play Editions have been bumped up to Android 4.3 Jelly Bean as an OTA update is now being pushed to both smartphones. Google has certainly kept its promise of having speedy update deliveries for these ‘special’ handsets and the new software comes not long after HTC and Samsung released kernel sources for the latest platform.

The Android 4.3 Jelly Bean firmware being rolled out to the HTC One and the Samsung Galaxy S4 Google Play Edition handsets is dubbed build JWR66V. Apart from the usual embellishments, a post on AnandTech notes that the Samsung Galaxy S4 has received Bluetooth tethering which permits internet access to connected devices when active, and the settings background has been replaced with the stock version which is gradient rather than solid black. For the HTC One, the IR blaster is reportedly functional. 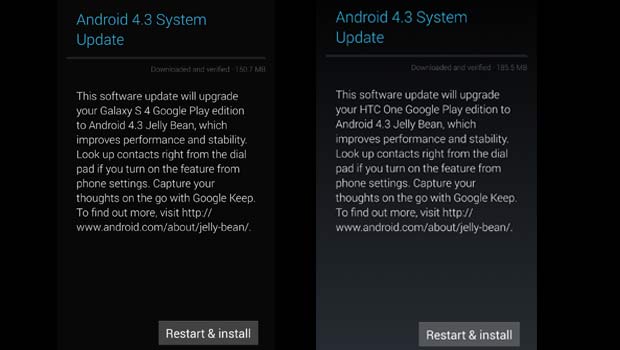 Apart from the HTC One and the Samsung Galaxy S4 Google Play Editions, devices in the Nexus program received an update to Android 4.3 the very same day the new Nexus 7 tablet was launched. The OS in general is a minor revision to its predecessor. However, it does tag along some pretty interesting features. It now supports OpenGL ES 3.0 for high performance graphics, a virtual surround sound mode in the music player, Bluetooth Smart (4.0 LE) and faster user switching amongst others.

One and Galaxy S4 Google Play Edition owners should receive the Android 4.3 Jelly Bean update sooner or later, that’s if they haven’t been treated to the latest firmware already. According to the report, the software is approximately 180MB for the former and around 150MB for the latter.