Samsung has reportedly starting rolling out an update for the Galaxy S3 smartphone which brings the device to Android version 4.3 Jelly Bean and introduces various new features. So far, the GT-I9300 model has started receiving the upgrade and other variants should be seeing it soon.

The Galaxy S3 was treated to version 4.1 and it has been stuck there for quite a long time. Well, it isn’t alone as the Note 2 is also sailing in the same boat. Samsung earlier confirmed that it would skip version 4.2 for 4.3 Jelly Bean considering that it’s a minor jump. Well, it’s here and the Note 2 will receive it soon. While no changelog has been provided, SamMobile has listed out what modifications and new features have been introduced. 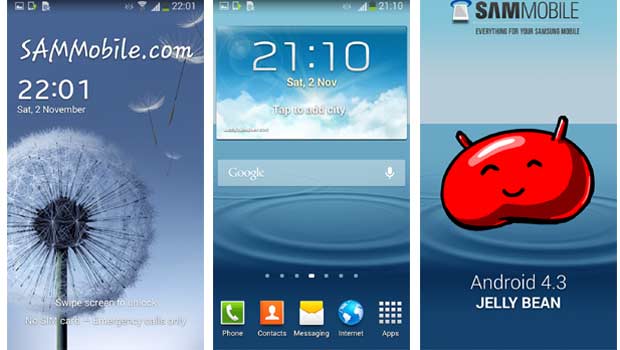 The core UI is now the same as the one found on the S4 and Note 3, albeit the launcher and widgets are still the old ones. A fresh lockscreen is also present with support for multiple widgets, adjustable clock size and a personal message. Additionally, the famous ripple effect has been improved. What’s interesting is that KNOX hasn’t been included, but it should arrive in a future release.

With Android 4.3, users will have access to the Move-to-SD feature, actionable notifications, a new S-Voice app as well as Sound and Shot for the camera. Support for various other attributes has been enabled. They include TRIM, ANT+ and the Galaxy Gear accessory. The firmware is being delivered over the air and is almost 1GB in size.

There are a lot more improvements. Hit the source link for a complete changelog on what Android 4.3 brings to the Galaxy S3.