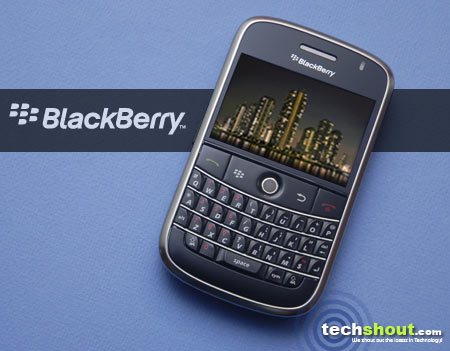 Bundled with simplicity and elegance, here’s a comprehensive review of the RIM BlackBerry Bold handset that managed to create quite a stir in the mobile market. With the likes of Apple’s iPhone and Nokia Nseries phones as tough competitors, we think Research In Motion (RIM) too isn’t far left behind. So we took off the time to lay our hands on the very new Blackberry Bold sometime during the past few days.

Boasting of sleek design for a smartphone, BlackBerry Bold adorns one of the most impressive looks in town. Even if you are not really a BlackBerry person, we think you may still find the handset appealing with its glossy new looks. Though the phone is packed with features signature to Blackberry, it is also loaded with some enhanced functionalities that raise the bar for Blackberry phones.

Below are some of the features the Bold sports:

What really impressed us the most was the very functional keyboard, in fact the keyboard left us with an unforgettable experience as it makes typing messages and getting through the phone really simple. The backlight feature of the keyboard is an added advantage.

We have to mention the screen of the Bold too. It certainly has one of the best mobile screens in town. The clarity and sharpness will certainly sweep you off your feet. We might just run out of words if we start describing the screen. Keeping it short and simple, it’s big, rich and vibrant!

3G data, GPS, and Wi-Fi support, all packed in one mobile device. Well, what more could you ask for! Connectivity with the BlackBerry Bold is really efficient and will surely keep you in the loop unless you reach the far end of the world. The handset boasts of much faster downloads compared to other Blackberry counterparts. The updated user interface is also quite stunning. An OS 4.6 with default Precision Zen themes blends in beautifully in the screen.

Another high spot of the phone we think is the web browsing capabilities. This time around RIM appears to have specially worked to allure users who love handsets with a great browser. With HTML support, getting through emails is really effortless. Packed with the popular Documents To Go application, handling attached files is also simple.

The leather backing along with a shape that perfectly fits in the hand makes the handset easy to grip. Compared to the BlackBerry Curve, the Bold with an identical 2 megapixel camera delivers images with better quality. Also copying images to memory is faster.

While incoming voice quality on the Bold is something to watch out for, the speakerphone mode too the phone will not leave users disappointed. The best part of this smartphone is its amazing battery life. Usage of the phone to the limits will still need you to charge the phone just about once in a couple of days. 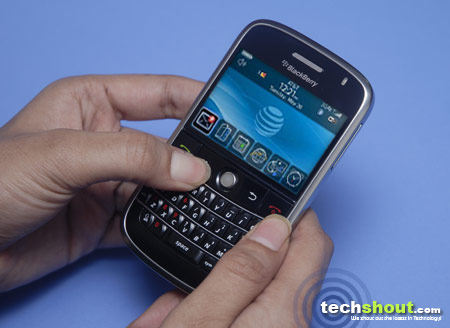 A new user may have difficulties going around the phone due to its new look. With initial help from the instruction manual users should be comfortable with the Bold. Though the Bold icons are large, they appear to mess up the screen a little bit. Also the larger icons have actually brought down the main menu layout to about three rows of icons. This will mean more scrolling around the main menu.

Though the screen is of top-class quality, it still appears to contrast at times. Also the trackball is quite inconvenient to use making navigation a little tedious. Another annoying aspect of the BlackBerry Bold, if we may call it so, is the change in color once you move into applications. Though you can set wallpaper on the home screen, it changes to a tacky blue gradient on traversing to applications.

What disappointed us the most is the fact that the phone supports PDF and RTF files only as attachments. There’s no support for standalone files. The handset also offers no support for Flash. The web browser though improved seems to sea-saw at times. While sometimes it re-sizes the screen perfectly at times it does not.

In terms of overall performance, we think the Blackberry Bold will surely leave its mark on users. We give it a cool 7 out of 10. If you need a phone that stands out in the crowd not just terms of design and look but also functionality, we think the Bold will be a great pick.

Though the price may seem a little too far fetched for around Rs 34,990, it’s worth every buck you pay. As of now the phone is available on three select operators in India namely Airtel, Vodafone and Reliance.

Grimoire Of Zero Season 2: [Here’s What We Know So Far]

Video Gaming through a Girl’s Perspective