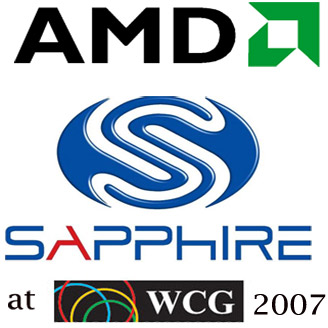 AMD has announced that Sapphire Technology, the official graphic supplier for the World Cyber Games 2007 Grand Final will be supplying graphic cards based on the ATI Radeon HD 2000 series from AMD for the tournament.

AMD, who is the official supplier of GPUs at the WCG 2007 event, will also host a demonstration area with Sapphire where the companies will showcase next-generation technology meant for the gaming community.

According to Godfrey Cheng, director of platform marketing and gaming, AMD Graphics Products Group, “As official suppliers for the WCG 2007, AMD is collaborating with Sapphire to present a world-class gaming platform experience for competitive and casual gamers.”

On display will be the Sapphire HD 2600 X2 DUAL PCI-Express card that packs in two Sapphire HD 2600 XT graphics processors in this single card. It is able to drive up to four Dual-link DVI displays or a single display in CrossFire mode with enhanced performance, and also includes 1GB of GDDR3 memory on board with 800Mhz clock speeds.

Adrian Thompson, vice president of Marketing, Sapphire Technology said, “The Sapphire HD 2600 XT brings a compelling mix of graphics quality and performance to the Grand Final 2007. It is just one of the great Sapphire products based on the ATI Radeon HD 2000 series that brings a wide choice to gamers in a range of state-of-the-art products that now extends from top-to-bottom.”

The World Cyber Games 2007 Grand Final is scheduled to take place in Seattle, WA from October 3-7 2007. The event is expected to feature over 700 gamers from 70 countries.

The best news is that participants who have qualified for the WCG 2007 Grand Finals will be eligible to participate in a contest where they will get a chance to win a Sapphire HD 2600 XT. Besides, other ATI Radeon and Sapphire branded products will be available as giveaways to interested participants at the event.

Click here to read about our take on the WCG 2007 India finals and the friendly India-Paksitan Counterstrike match.