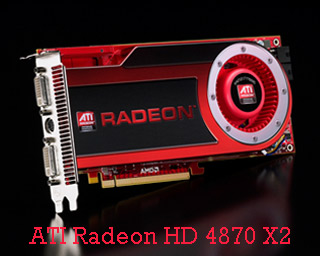 The latest series from the producer of graphics card engages in it two ATI Radeon HD 4800 series GPUs combined with more effective and advanced cross-GPU connection based on the PCIe 2.0 standard, two gigabytes of memory and support for DirectX 10.1. With all these features, the graphics cards claim to be a best suit for any demanding game, delivering extreme frame rates, resolutions and image qualities. 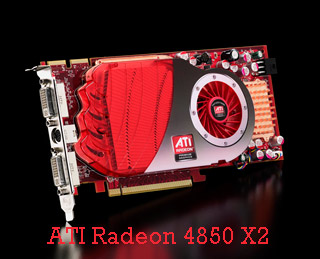 “The ATI Radeon HD 4800 X2 series continues AMD technology leadership with support for DirectX 10.1, tessellation, and now 2GB of frame buffer. The new products join a line-up of stellar offerings, all of which are designed to give gamers experiences that approach eye-definition computing.”

The ATI Radeon HD 4870 X2 not only boasts of being the world’s fastest card but also 2.4 teraFLOPS of processing power on a single card providing a cinematic experience. It owes its ultra-high speed to 2GB of ultra-high bandwidth GDDR5 memory. It also features two GPUs clocked at 750 MHz on the second generation 55nm technology, and not to forget the 1600 stream processors. The unique feature of the 4870 X2 is that it offers eye-definition computing gaming rendering real-time activity.