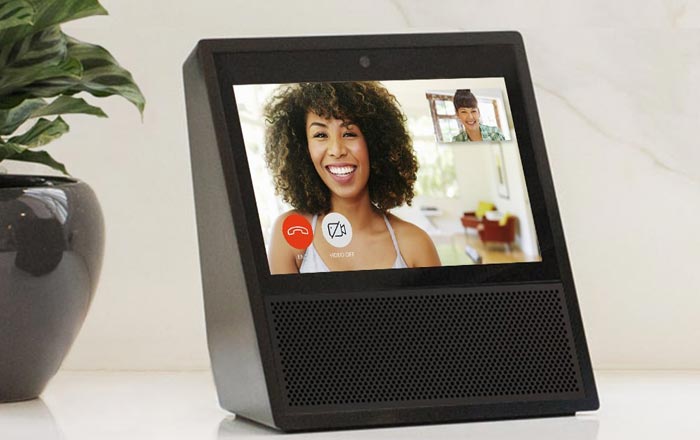 Amazon’s heavily leaked Echo Show has gone official, becoming the first-ever Echo device to feature a touchscreen. It’s now up for pre-orders in the US priced at $229.99 apiece. Buying two together will get you a $100 discount.

The Echo Show works within the same Alexa-powered playbook while adding a bunch of new features thanks to specs like a 7-inch display and 5MP camera. Now when you ask for the weather or guidance for cooking, you can actually see a full weather report or a recipe video. Music played via Amazon Music will display lyrics for karaoke showdowns.

Amazon has so far added streaming support for YouTube and Amazon Video content, in addition to news via outlets like CNN. You’ll further be able to use it as a screen for security cameras, letting you issue commands like ‘Alexa, show me the front door camera.’ It can even be utilized as a baby monitor.

The Echo Show is looking to replace your phone, tablet or computer as your calling device of choice since it can make video calls to other Echo Show or Alexa app users hands-free. It comes with a ‘Drop In’ feature that lets an approved list of people call you at anytime without requiring you to pick up.

Drop In sounds like it could be a bit privacy-invasive if it falls into the wrong hands. Amazon imagines it as something which can be utilized for checking in on an elderly relative or informing family that it’s time for dinner. This sounds solid on paper, but it could be abused by hackers to switch on the camera and spy on you.

In good news for the Echo and Echo Dot, Amazon isn’t restricting communications to just the Echo Show. You can now ask Alexa to start a voice call or shoot out a voice message. The person at the other end of the line will have to have an Echo device or the Alexa app for this to work.

The Echo Show will commence shipping on June 28. Once again, you can pre-order it via Amazon.