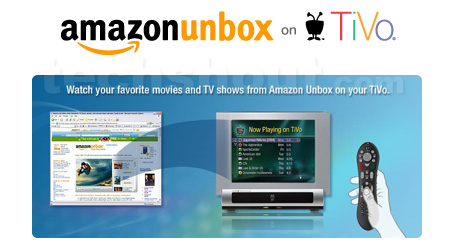 On Wednesday, Amazon Inc. introduced a new service that allows users to watch video bought over the internet and sent to a home television hooked up to a TiVo set-top box.

The latest service dubbed “Amazon Unbox on TiVo” was initially announced in February. It extends the online retailer’s Unbox download service to over 1.5 million TiVo Inc. subscribers whose boxes can access the Internet via a high-speed connection. Last month, analysts said the service shows content companies may be regarding TiVo as both a potential partner and a distribution platform.

Under an exciting introductory offer, TiVo is offering $15 in free movie and TV show downloads to those who sign up. Television show episodes go for $1.99, and most movies cost between $9.99 and $14.99. Amazon and TiVo are jointly sharing the marketing cost for the new service’s launch.

The service comes as media and technology companies experiment with new ways to court viewers who split their time between viewing traditional media, surfing the Internet and playing video games.

By going directly to the TV, Amazon’s TiVo partnership takes downloads a step further than online video stores like those of Wal-Mart Stores Inc. and Apple Inc., which are geared toward PCs or portable devices. PricewaterhouseCoopers says the Internet video download business is expected to be worth $3.7 billion in annual revenue in 2010.

However TiVo has a long way to go to compete with Apple, which has sold millions of iPods than can download video from iTunes. Only about 600,000 users have hooked up their TiVo box to a broadband connection, but Tara Maitra, Vice President of Content Services at TiVo, says that is “a positive.”

“The rate at which we went from zero to 600,000 has happened very quickly. Something like 60 percent of new boxes are connecting, so certainly the level of interest for having the TiVo on a home network is growing,” said Maitra.

For TiVo, Unbox adds another feature that makes a distinction its video-recording technology from generic digital video recorders offered by cable and satellite providers.

Under the Unbox service, viewers must buy their video, or pay for the rental, from PCs. TiVo downloads will count against a two-PC limit on Unbox purchases, though Unbox users can still download the shows to two handheld devices.

Below is a gist of the offerings being offered by Amazon and TiVo, which includes: