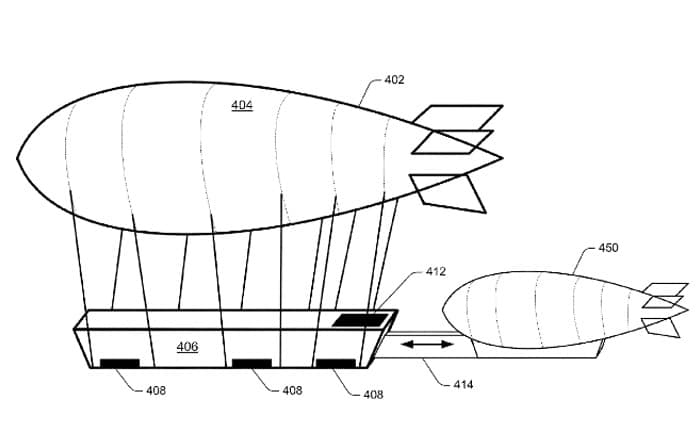 Amazon hit headlines earlier this month when it began formally testing its drone delivery service in the UK. As it turns out, the e-commerce giant has much more futuristic plans in place when it comes to sending goods via flying vehicles.

Amazon was recently granted a patent for an airborne fulfillment center (AFC). The zeppelin-like structure hangs at about 45 feet in the air and utilizes drones to deliver items to customers. Essentially a flying warehouse, the AFC would stock up on products and be positioned in locations where those goods might be in demand.

For instance, people might be able to spot Amazon’s flying wonders near a sporting event in the future, handily supplying merchandise or food to fans below. It could even be placed close to a stadium to quickly hand over audio or outdoor display advertising.

Other than the AFCs and UAVs soaring around, Amazon also talks about shuttles that will be used to restock the former’s inventory, supplies, and fuel. It could even be utilized to transport workers and drones, making sure the latter conserve power by utilizing energy reserves to only make deliveries.

All the modes of transport, remote computing resources, and land-based command centers involved are further connected by an extremely complex network to ensure that everything runs smoothly and in sync. The shuttles and drones would additionally communicate about things like the weather, routing, and wind speed with each other via a mesh network.

It should be noted that Amazon’s airborne fulfillment center is still at just the patent stage as of now. The company itself hasn’t said anything official about the far-out concept.