Amazon Kindle Fire press shot shows up on the web

The new Amazon Kindle Fire tablet has been making headlines for quite some time now and the gadget is once again in the spotlight because its press shot has been leaked on the internet. This picture does look like the real deal and we are expecting the guys over at Amazon to make it official sooner rather than later.

@evleaks has laid its hands over the render, but the serial leaker doesn’t seem to have details concerning the internal components and features of the device. On close inspection, prospective customers will notice that the tablet here lacks a front-facing camera. And earlier rumors have revealed that HD versions of the Kindle Fire will most probably be playing hosts to a webcam. This leads us to believe that the gadget seen here may not be the HD variant, but a basic model. The grapevine has even been buzzing with speculations that the next generation Kindle slabs will arrive in screen configurations of 7 and 8.9 inches, just like their predecessors. 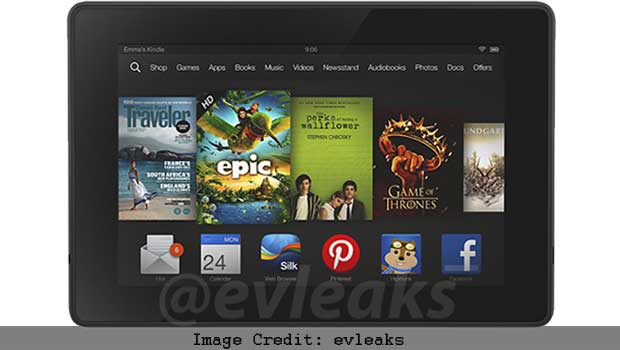 Let’s take a look at the purported features of the HD versions of the tablet which have surfaced through various sources. Reportedly, the 7-inch HD contender will deliver visuals in 1920 x 1200p resolution, whereas the 8.9-inch model boasts of a 2560 x 1600p screen. Also according to some benchmark results, the bigger gadget is likely to come with a Qualcomm Snapdragon 800 processor and 2GB of RAM in tow. Both devices will be available in variants with 16GB, 32GB or 64GB internal memory.

We are yet to receive an official confirmation regarding the Amazon Kindle Fire.