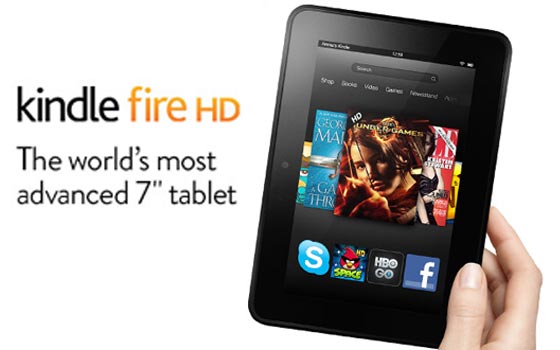 Those who had been eying the Amazon Kindle Fire HD, but had put off purchasing the tablet to a later date are in for a pleasant surprise. Amazon has knocked off some bucks from the slate’s price tag for people living within the boundaries of the US and the UK. Unfortunately, this offer has been restricted only to the 7-inch device.

But on the brighter side, the manufacturer has reduced the retail price for the 16GB as well as the 32GB variants of the Amazon Kindle Fire HD. The ad-supported version of the former model which had previously been pinned at £159 in the European region, has now taken up a £139 tag. Likewise, the asking amount for the tablet with larger storage capacity has dropped from £179 to £159. The commercial-free units of both demand £10 more than the recently reduced rates.

As for American residents, the 16GB Amazon Kindle Fire HD can now be purchased for $169 instead of $199. At the same time, the 32GB unit that had so far shown off an RRP of $229, has gone up on sale for $199. The aforementioned rates that relate to the tablet’s variant falling under the ‘Special Offers’ category, proffer precisely $30 discounts on each purchase.

Similarly, subsidies meant for the Amazon Kindle Fire HD which abjures such offers and sponsored screensavers, also sum up to $30 each. These variants can be seen with retail labels reading $184 (16GB) and $214 (32GB). The company has indicated that the scheme has been made available only for a limited span, while the last day remains unknown.

Customers looking for similar offerings on a larger screen estate can turn to the 8.9-inch model of the Kindle Fire HD, which starts at a price of £229 in the UK and $269 in the US.