Still having a rough time getting your hands on an invite for the OnePlus One in India? Well, Amazon will soon let you catch a break from hunting down invites as it’s holding an open sale for the flagship killer smartphone on March 24.

This basically means that you will be able to purchase the OnePlus One handset by simply adding it to your cart on the same date. Amazon notes that the sale begins at 10am and will continue for as long as stocks last. It also goes on to sale that there will be a limited inventory of devices available. 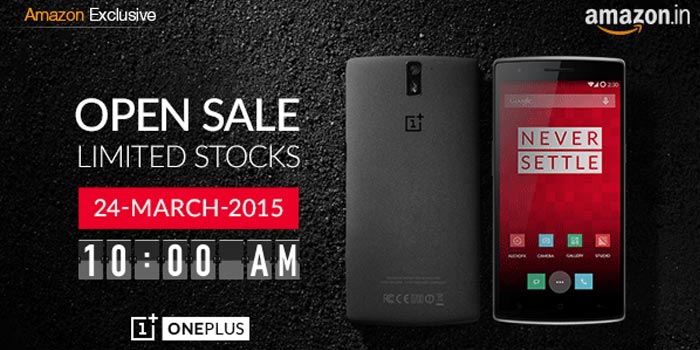 Nevertheless, there’s a very high chance that you’ll be able to get the phone as previous sales went on for more than a few hours. Additionally, OnePlus will be offering both, 16GB silk white and 64GB sandstone black models on March 24. The former handset is priced at Rs 18999, while the latter is retailing for Rs 21999.

If for some reason, you’re unable to get the One flagship killer at the open sale, you can subscribe for an invite through Amazon right away as a backup plan. There’s, however, no certainty that you will land one, but it’s worth a try. In other news, the company plans to bring its new 10000mAh power bank to India soon for around Rs 1000.

Head over to Amazon India for more details on the OnePlus One open sale.