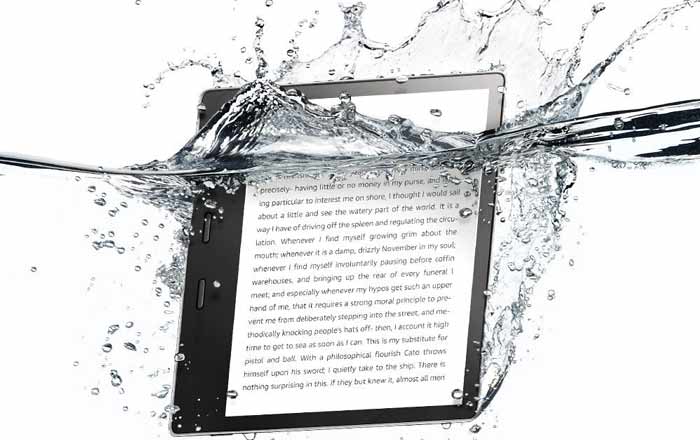 Amazon has announced the all-new Kindle Oasis, bundling in a number of upgrades over the original including a bigger screen and waterproofing. It’s actually the first e-reader from the company which boasts of being resistant to liquids, a feature which has been requested for years at this point.

Specifically, the Kindle Oasis is IPX8 rated to shield itself from being destroyed in up to 2m of fresh water for up to an hour. There’s also added protection against splashes at beaches, hot tubs, and pools. It’s not completely immune to water attacks though, so it would be best not to frequently drown it.

Last year’s Kindle Oasis had a 6-inch display and a tapered design to imitate the feeling of a book. This year’s model gets a 7-inch 300ppi upgrade and sticks to the same style, only with aluminum on its back for a more premium look. The dedicated page turn buttons are still present, with Amazon claiming that users will have to turn pages less often because it was able to fit 30% more words per page.

Amazon has also integrated Audible into its latest Kindle, so people can access their audiobook straight from their e-reader. However, the device doesn’t have a speaker, so they’ll have to stream via a Bluetooth-ready speaker or headphone.