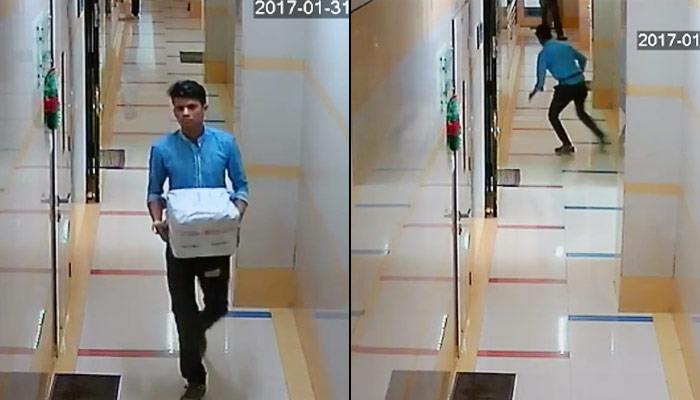 When you’re as big as Amazon, caring about a serious problem faced by a customer or two apparently doesn’t matter. We discovered that the hard way over the past two weeks. On January 31, an Amazon delivery guy stole a 64GB iPhone from our media office in Mumbai. What followed was a 10-day nightmare involving apathetic customer care service, fruitless trips to the police station and some sleuthing on our part. Our quest ended well, no thanks to Amazon.

A delivery person employed by Amazon India entered our office some time after 1.40pm, handed over a package to Sohil Nikam (chief reviewer for TechShout.com) and asked for a pen. In the few seconds that our colleague moved 10-feet away to grab one, he slipped from the lobby to a nearby workstation and pocketed a 64GB iPhone 6 from the unattended desk.

When the owner, a news correspondent for TechShout.com returned from her break, and asked about her Apple phone which had been sitting on her keyboard, Sohil went outside to talk to the security guards since the extremely nervous exit of the delivery guy aroused his suspicion immediately. Meanwhile, a thorough search was being conducted in our office.

Another employee rang up the missing iPhone and found that it had been switched off. The battery had been full just 20 minutes prior to it going missing. There was no doubt about it – someone had stolen the smartphone. CCTV footage obtained later confirmed our suspicion since it showed the delivery person pulling the phone he lifted, out of his back pocket.

When we contacted Amazon for his name, number and/or address so we could file a police report, customer care (CC) said it would take 24 hours for information of the warehouse from which the thief came to be updated, and confirmed that Amazon Transportation Services had handled the delivery. In further communications with CC, we pleaded that unnecessary delays would allow the delivery guy time to sell off the iPhone.

Over the next few days, Amazon stalled our efforts to recover the device, and finally helped only because of continued pressure from us. How do we know this? Take a look at all the evidence. Amazon had identified the thief on February 6 or before that, but had the gall to us ask for proof via CCTV footage, even after we pointed out that the suspect’s story about having called us (we’ll come to this in a bit) was enough evidence of his guilt.

After we dispatched a mail with links to the security footage, the courier person’s details were still withheld. Only following our tweet to Amazon CEO Jeff Bezos on February 7 in a last ditch attempt to get things moving, did the company respond with an email asking us for 3 more business days to work on the issue. Amazon offers same-day deliveries, but can’t even track a thieving employee in 8 days!?

So on February 8, one of our colleagues went to the Amazon warehouse/office in Mumbai and doggedly pursued the matter. Binoy Raphael (part of Amazon’s security team) who was on the premises waved him off at that point too. Within hours of this confrontation, Raphael called to inform us that the iPhone had been recovered, and we could come to collect it at our convenience.

How we were treated by Amazon security:

Incredibly enough, the Amazon security person we met at the warehouse, a sickeningly smug and unapologetic chap called Anil Singh, whose team was charged with the sole intention of investigating the theft, claimed to be unaware that the delivery person had been found and questioned two days prior to the stolen iPhone being magically produced before us.

He apparently did not have the most important detail of the case he was ‘investigating’ – Amazon mailed us on February 6 saying the delivery person called us claiming he hadn’t nicked the iPhone, and that the matter had been solved. We had not received any such call and asked whether Amazon had been able to verify his statement through his call records. We got no reply to that.

Singh began talking to us by distancing Amazon from the courier person who had purloined the iPhone. He said the ‘manpower was supplied by Wow Express’ but admitted the thief was indeed employed by Amazon. He wasn’t able to explain why the investigation had taken more than a week. He went on to arrogantly tell us that the final thing was that the problem had been resolved. 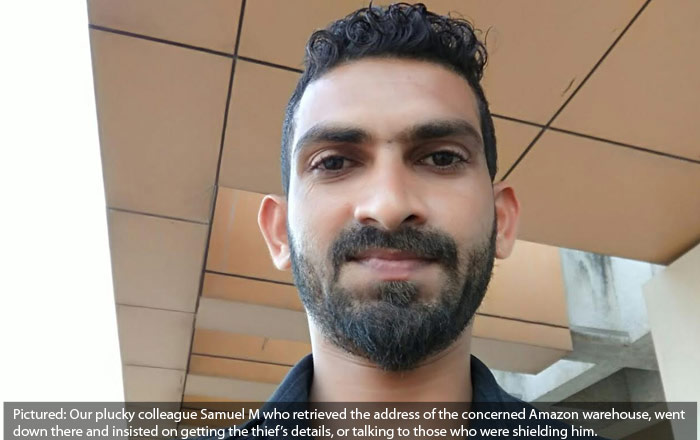 EDIT: Amazon cannot claim it’s against company policy to give away the name and phone number of its courier persons since customers are sent said details when a package is out for delivery. We did not receive such an SMS on January 31. And if the mobile device belongs to Amazon, it could have disproved the agent’s story of having spoken to us by going through call records.

When we asked why Amazon had decided to take the law into its hands and refused to provide the delivery agent’s information for police investigation, he skirted the issue. He had allegedly found out about the entire incident only on February 8. He could not answer who had questioned the courier boy previously, and went so far as to say customer care might have done so.

Upon being pressed to justify the delay, Singh then said a complaint about the matter had been sent to the wrong warehouse (there are two in Mumbai), and had been redirected to the station we visited on February 8. We asked him which delivery guy had been questioned on or before February 6 if this was the case. He again failed to provide a convincing response. No clear answers were forthcoming.

We had a spy pen and two other cameras on us to ensure any untoward incident would not go unrecorded since through our interactions with them, Amazon’s executives had been giving us the impression that they were above the law. At one point during the interview, Singh mockingly pointed out that he had noticed our pen camera, and that we were being recorded too.

It wasn’t clear whether he meant it as some sort of warning we were supposed to be scared of (incidentally, the conspicuous camera placement is the first thing which draws the eye in the cabin in which the interrogation took place). Since all our questions were being answered with claims of ignorance about the subject matter, we finally left the warehouse in dissatisfaction. 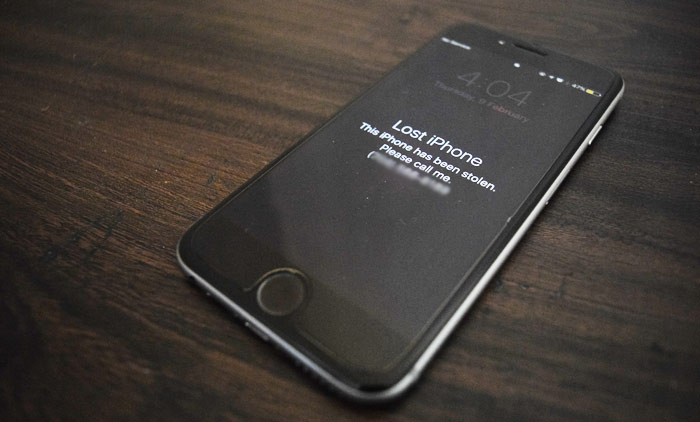 How the police reacted:

The first time the victim went to the police station to file a complaint on the day of the crime, they misled her by saying an NC would have to be lodged. On February 7, after being requested to take up the problem once again, a police officer tried to extract the details of the delivery guy from customer care to no avail (and asked us to come the next day). CC told us to mail Amazon in this regards, and that went unanswered too.

When you can insist on an FIR being lodged:

“Information given to the police about the loss of a mobile phone, laptop or any other electronic or personal item is treated as a non-cognizable complaint. On the other hand, if somebody steals or snatches something or cheats you out of something, then that is a cognizable offense and therefore an FIR has to be registered, as it should have been in this case,” she continues.

Jan 31 – iPhone stolen by Amazon delivery agent, police complaint lodged and customer care (CC) contacted. We’re asked by CC to wait 24 hours for the details.
Feb 6 – No updates from Amazon. Upon being requested to take up the matter again, we’re told we were sent a mail. We hadn’t got any at that point.
The mail that was resent to us claimed the delivery guy had cleared the issue with us and Amazon would like the close the matter.
We ask them to check his records if that was the case since we didn’t get any calls. No reply to that specific request.
Victim gets nervous, worrying whether the thief will come back with the idea of doing something dangerous.
Feb 7 – CC withholds the name of the courier person even after knowing he was guilty, tells us to mail Amazon asking for the information, cannot point us to anyone who can handle the matter speedily after the completely unnecessary week-long delay.
We mention Jeff Bezos in a tweet and finally get a response past from Amazon – asking for 3 more days!
Feb 8 – Our colleague goes to the Amazon warehouse, the staff present there surround him, demand to know where he found the address. Within a few hours, we get a call asking us to collect the stolen iPhone.
Feb 9 – Wary of the events that unfolded over the previous days, we go armed with cameras, recover the phone and ask why the thief’s details were kept hidden from police.
We get the usual canned responses, no apology, just that the thief’s contract has been terminated. We’re told we are being recorded too.
Feb 10 – Still no official apology from Amazon for delaying the recovery of the iPhone, the physical and mental trauma to the victim, and risking it being sold off by the thief.

Since we recovered the iPhone, Amazon hasn’t got back to the aggrieved parties with an official apology for the delay it can’t seem to explain. Not only did Singh who represented Amazon, express no regret about the 10-day ordeal suffered by the customer and the victim, he went so far as to dismissively say that CC would send us an acknowledgement.

At the time of publishing this post, we hadn’t received an official apology from Amazon India. All we were asking was for them to do was the right thing and help hand over the basic details of the suspect to the police.